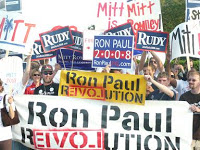 from raw story: Saturday’s vote was long-shot candidate Ron Paul‘s chance to show his anti-war and libertarian views had resonance beyond his committed core of online supporters.

Paul’s campaign made a concerted push for support in the weeks leading up to this weeks vote, through extra visits to the state from the candidate, and a cavalcade of television, radio and newspaper advertisements. Des Moines Register columnist David Yepsin, who attended the straw poll in Ames, Iowa, said Paul’s supporters “won the visibility wars,” and bloggers at National Review Online’s The Corner noted the large number of anti-war Republicans who had come to support the Texas congressman.

“The Ron Paul ‘Peace Train’ nearly drowned me out!!!” talk show host Laura Ingrham wrote at the Corner. “They emerged this afternoon from the corn fields, pumped up and ready to wage ‘peace’ in Iraq and throughout the world.”

Paul managed to quadruple his level of support in Saturday’s non-binding, non-scientific straw poll with 9 percent of the delegates in Ames backing him, compared to about 2 percent of Iowa Republicans who have told pollsters Paul is their choice. That put him in fifth place among the Republicans competing, but Paul’s campaign is encouraged by the result…

A Paul supporter circulated a flyer around Iowa and online encouraging those backing Paul to accept Romney’s free bus rides to the straw poll. Paul’s campaign denied any connection to the flyer.

Other Paul supporters – who also were unaffiliated with the campaign – failed in their push to block the vote based on concerns over insecurities in the Diebold machines on which Republicans cast their votes, the Associated Press reported. The Paul supporters took their case to the 8th Circuit Court of Appeals, after being blocked by a lower court, but the appeals panel also refused to join an injunction against the vote, an attorney for the Iowa GOP, Matt McDermott, told the AP.

The announcement of poll results was delayed because of a voting machine malfunction; about 4,500 ballots had to be re-run, Marc Ambinder reported on his blog at The Atlantic online. The Des Moines Register reported that the day’s high humidity caused some ballots to stick together, necessitating the recounting.

and this is the email message from the ron paul campaign…

On behalf of Dr. Ron Paul and his wife Carol, and the Ron Paul 2008 campaign staff, I thank our supporters and volunteers in Iowa and throughout the country for the strong showing in the Iowa straw poll. We are pleased and encouraged by the results.

We have the three ingredients for success:
1. The message: freedom, peace and prosperity.
2. The man: Ron Paul.
3. You.

Our campaign has begun.