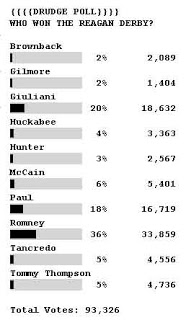 here is the highlight compilation of ron paul at the first republican debate...

well, as i started writing this, the drudge poll closed. but i was able to get my vote in for ron paul on the 'who won the reagan derby?' poll... with 18% and 17,028 votes (and still counting), ron paul placed a strong third behind the 9/11 criminal & the mormon

from reason: Matthews' devious "ignore Ron Paul" plan backfires when Paul gets the last word in the debate. And yet afterwards, no one wants to talk to him - Romney dives offstage to mug with Nancy Reagan, and Paul is left huddling with Tancredo. It looks not unlike the Math Olympics team sitting at the back of homeroom as the popular kids talk about the awesome kegger at Todd's house this weekend.

from peggy noonan: All the candidates save one, the obscure but intellectually serious Ron Paul, seemed to be trying to show they will not break with the Bush administration on the war, but that, at the same time, they each know a heck of a lot more than President Bush.