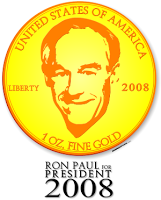 from free market news: Sources close to the Ron Paul (R-Tex) presidential campaign point out gleefully that in a single night Ron Paul took in more money - $102,000 - than the entire GOP apparatus did with its convoluted “first ever” straw poll - $97,500.

The recent Texas straw poll reportedly charged $75 a head for voting rights and while GOP officials had expected 2,000 to vote, only 1300 reportedly did. Meanwhile, Ron Paul, who finished third in the highly restrictive straw poll, had his most successful fund raiser ever in Texas. The congressman raised $102,000 at a fund raiser hosted by the Highland Park Huffines family.

“More and more, the tail is wagging the dog in this presidential campaign,” one source pointed out. “The Texas straw poll was structured so that you could only vote if you had been a former GOP delegate. Even rank and file GOP-ers couldn’t vote. The only reason for such a restrictive system is to ensure that Ron Paul didn’t win. Those eligible to vote are the most hawkish, most pro-military and big-government oriented ‘conservatives’ in Texas. They have as little understanding of Jeffersonian, small government republicanism as big government democrats.”

And this source concluded, “Ron Paul still did well, finishing in third place in a straw poll that was rigorously structured to make sure he would not win. But maybe the real vote can be seen by his fund-raising success. He out-raised the entire Texas GOP in a single night. He’s one of the hottest politicians in the country going into the upcoming debates on Fox.”