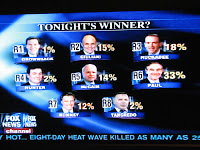 Paul, who has polled poorly in national surveys, has a tremendous following online. His supporters have been instrumental in demonstrating his strength on popular news voting sites like Digg.com and Reddit.com.

The Texas congressman has co-sponsored a bill with another presidential contender, Democrat Dennis Kucinich (D-OH), that would repeal President Bush's authority to use force in Iraq within the next sixth months. Besides Kucinich, 18 other Democrats have signed on.

Clips of his answers at the debate can be found here.