Ronald Reagan and the Occult 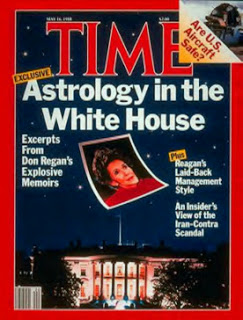 from TheWashingtonPost: “Ronald Reagan had an interest in lucky numbers and newspaper horoscopes. Less known is that a certain scholar of occult philosophy had a lifelong influence on the 40th president of the United States. Mitch Horowitz, editor-in-chief of Tarcher/Penguin and the author of “Occult America: The Secret History of How Mysticism Shaped Our Nation,” reveals the details. The full article is here.

In spring of 1988, White House spokesman Marlin Fitzwater acknowledged publicly what journalists had whispered for years: Ronald and Nancy Reagan were devotees of astrology. A tell-all memoir had definitively linked the first lady to a San Francisco stargazer, confirming speculation that started decades earlier when Reagan, as California’s governor-elect, scheduled his first oath of office at the eyebrow-raising hour of 12:10 a.m. Many detected an effort to align the inaugural with promising heavenly signs. Fitzwater also confirmed the president’s penchant for “lucky numbers,” or what is sometimes called numerology.

There was more to the story than the White House let on. In a speech and essay produced decades apart, Reagan revealed the unmistakable mark of a little-known but widely influential scholar of occult philosophy, Manly P. Hall. Judging from a tale that Reagan borrowed from Hall, the president’s reading tastes ran to some of the outer reaches of esoteric spiritual lore.

Hall, who worked in the Reagans’ hometown of Los Angeles until his death in 1990, attained underground fame in the late 1920s when, at the age of 27, he published a massive codex to the mystical and esoteric philosophies of antiquity: The Secret Teachings of All Ages. Exploring subjects from Native American mythology to Pythagorean mathematics to the geometry of Ancient Egypt, this encyclopedia esoterica won the admiration of readers ranging from General John Pershing to Elvis Presley. Novelist Dan Brown cites it as a key source.

After publishing his great work, Hall spent the rest of his life lecturing and writing within the walls of his Egypto-art deco campus in L.A.’s Griffith Park neighborhood. He called the place a “mystery school” in the mold of Pythagoras’s ancient academy. It was there in 1944 that the occult thinker produced a short work, one little known beyond his immediate circle. This book, The Secret Destiny of America, caught the eye of the future president, then a middling Hollywood actor gravitating toward politics.

Hall’s concise volume described how America was the product of a “Great Plan” for religious liberty and self-governance, launched by a hidden order of ancient philosophers and secret societies. In one chapter, Hall described a rousing speech delivered by a mysterious “unknown speaker” before the signing of the Declaration of Independence. The “strange man,” wrote Hall, invisibly entered and exited the locked doors of the Philadelphia statehouse on July 4th, 1776, delivering an oration that bolstered the wavering spirits of the delegates. “God has given America to be free!” commanded the mysterious speaker, urging the men to overcome their fears of the noose, axe, or gibbet, and to seal destiny by signing the great document. Newly emboldened, the delegates rushed forward to add their names. They looked to thank the stranger only to discover that he had vanished from the locked room. Was this, Hall wondered, “one of the agents of the secret Order, guarding and directing the destiny of America?”

At a 1957 commencement address at his alma mater Eureka College, Reagan, then a corporate spokesman for GE, sought to inspire students with this leaf from occult history. “This is a land of destiny,” Reagan said, “and our forefathers found their way here by some Divine system of selective service gathered here to fulfill a mission to advance man a further step in his climb from the swamps.”

“I’d heard my parents [Ron and Nancy] read their horoscopes aloud at the breakfast table, but that seemed pretty innocuous to me.  Occasionally, I read mine, too–usually so I can do the exact opposite of what it says.  But my parents have done what the stars suggested–altered schedules, changed travel plans, stayed home, cancelled appearances.”
–Patti Davis (formerly Patricia Ann Reagan), The Way I See It

“Emerging from a particularly credulous Southern California culture, Nancy and Ronald Reagan relied on an astrologer in private and public matters–unknown to the voting public.  Some portion of the decision-making that influences the future of our civilization is plainly in the hands of charlatans.”
–Carl Sagan, The Demon-Haunted World
“Mrs. Reagan’s dependence on the occult went back at least as far as her husband’s governorship, when she had depended on the advice of the famous Jeane Dixon.  Subsequently she had lost confidence in Dixon’s powers.  But the First Lady seemed to have absolute faith in the clairvoyant talents of a woman in San Francisco.”–Donald Regan (Reagan’s Chief of Staff), For the Record: From Wall Street to Washington
“Virtually every major move and decision the Reagans made during my time as White House Chief of Staff was cleared in advance with a woman in San Francisco who drew up horoscopes to make certain that the planets were in a favorable alignment for the enterprise.”
–Donald Regan (Reagan’s Chief of Staff), For the Record: From Wall Street to Washington
“The frustration of dealing with a situation in which the schedule of the President of the United States was determined by occult prognostications was very great–far greater than any other I had known in nearly forty-five years of working life.”–Donald Regan, For the Record: From Wall Street to Washington
#HolyHexes, Uncategorized
astrology, ronald reagan, the occult, the secret teachings of all ages