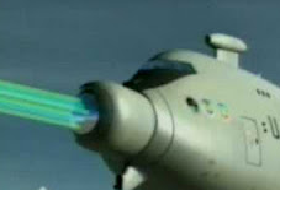 Rumors focus on a streak of light spotted just prior to break up, last week, of North Korean rocket. A blog entry, "North Korean missile shot down" suggests strenuous spying on US military computer systems, in effort to detect military op, turned up little except for a "Ballistic Control Contingency Memo." Memo lists near top of several layers of defense deployment - the YAL1 airborne laser (picture). Dean Esmay describes in a blog entry how tech exists for shooting down rocket. Esmay believes goal can be easily achieved, "a fairly low power airborne laser can weaken a rocket’s fuel tanks enough to cause them to rupture. And no one will ever know whether it was a bad fuel tank or outside interference." Is the United States engaged in a space blockade of North Korea?