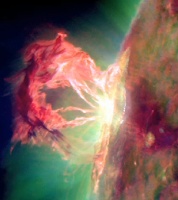 Wow!  Spaceweather.com shares fantastic image captured by the Solar Dynamics Observatory. "Magnetic fields on the sun's northeastern limb erupted around 17:45 UT on April 16th, producing one of the most visually-spectacular explosions in years. NASA's Solar Dynamics Observatory recorded the blast at extreme ultraviolet wavelengths: The explosion, which registered M1.7 on the Richter Scale of solar flares, was not Earth-directed. A CME produced by the blast is likely to hit NASA's STEREO-B spacecraft, but probably no planets."  It's very impressive sight to behold!