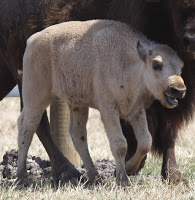 from NPR: There’s now a $45,000 reward for information leading to those responsible for the death of a white buffalo, “considered sacred by its Lakota Sioux owner,” and its mother near Greenville, Texas, according to the Fort Worth Star-Telegram‘s Crime Time blog. The size of the reward has gone up ninefold in recent days and is likely headed higher, the blog adds. Donations have been coming in from around the nation.As Crime Time reports, “Lightning Medicine Cloud and his mother, Buffalo Woman, were killed just shy of the white buffalo’s first birthday. Arby Little Soldier,great-great-great grandson of Sitting Bull and owner/operator of the Lakota Ranch, said Monday that he found the calf slaughtered and skinned April 30 after returning to the North Texas town from an out-of-town trip to Oklahoma City.” Buffalo Woman died a day later. Little Soldier suspects she was poisoned.
http://youtu.be/HCdXXHHV7Gc