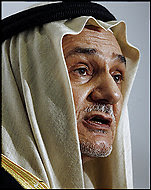 from washington post: Prince Turki al-Faisal, Saudi Arabia's ambassador to the United States, flew out of Washington yesterday after informing Secretary of State Condoleezza Rice and his staff that he would be leaving the post after only 15 months on the job, according to U.S. officials and foreign envoys. There has been no formal announcement from the kingdom.

The abrupt departure is particularly striking because his predecessor, Prince Bandar bin Sultan, spent 22 years on the job. The Saudi ambassador is one of the most influential diplomatic positions in Washington and is arguably the most important overseas post for the oil-rich desert kingdom.

Turki, a long-serving former intelligence chief, told his staff yesterday afternoon that he wanted to spend more time with his family, according to Arab diplomats. Colleagues said they were shocked at the decision.