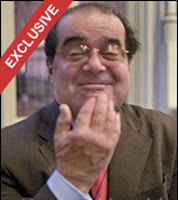 from raw story: Several Supreme Court Justices have recently defended their intervention in the Bush v. Gore case that handed the presidency to George W. Bush in 2000. Sitting Justice Antonin Scalia responded to critics of the decision by telling them to ‘get over it,’ according to the report by the Associated Press.

AP reporter Mark Sherman brought together comments from two current and one retired Supreme Court Justice on the highly controversial 2000 case. In a recent address at Iona College, Justice Scalia told an audience that it was time for people to stop complaining about the case. “It’s water over the deck — get over it,” Scalia said to laughs in the audience.

Sitting Justice Anthony Kennedy and his retired colleague Sandra Day O’Connor also said that the Supreme Court had no choice but to intervene in the case. “A no-brainer! A state court deciding a federal constitutional issue about the presidential election? Of course you take the case,” Kennedy told Jan Crawford Greenburg, an ABC News correspondent in the book Supreme Conflict.

O’Connor is reported to have said that the Court could have made a better decision if it had more time, though she pointed to some studies showing that Candidate Bush might have prevailed if the recount had only proceeded in counties where former Vice President Al Gore initially challenged the tally.

In the Bush v. Gore decision, the Supreme Court overturned a decision by the Florida Supreme Court to proceed with a recount. The decision handed the state’s electoral votes to Bush, resulting in his election.

The full AP article can be found at this link.