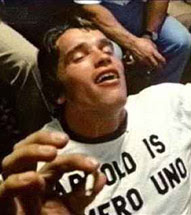 from dpa: California Governor Arnold Schwarzenegger said Tuesday that the state should have a debate on legalizing and taxing marijuana, but clarified that he did not necessarily support the idea. The former action movie star, who was filmed puffing a joint in the documentary film Pumping Iron, said that it was time for California to "study whether to legalize and tax marijuana for recreational use." Speaking at a press conference the Republican said: "I think we ought to study very carefully what other countries are doing that have legalized marijuana and other drugs, what effect did it have on those countries?" California legalized medical marijuana in 1996 and has a bill pending that would impose a 50-dollar tax on every ounce of marijuana, which could bring in an estimated 1 billion dollars a year to the cash-strapped state.

poll finds for 1st time, majority in cali support legal marijuana
from raw story: A recent Field Research Corporation poll of Californians found, for the first time ever, a majority in the state support legalizing marijuana and taxing it similarly to alcohol. The poll [88kb PDF], an “independent and non-partisan survey,” centered mostly on tax issues. Results were culled from the answers of 901 registered California voters, with a margin of error of +/- 3.4 percent.