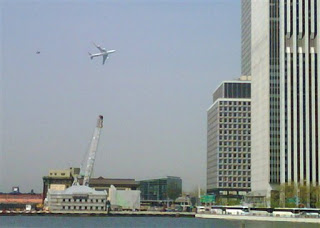 from nypost: The $328,835 snapshots of an Air Force One backup plane buzzing lower Manhattan last week will not be shown to the public, the White House said yesterday. "We have no plans to release them," an aide to President Obama told The Post, refusing to comment further. The sole purpose of the secret photo-op, which sent thousands of New Yorkers running for cover, was to take new publicity shots of the presidential jet over the city. "The photos... are classified -- that's ridiculous," Councilman Peter Vallone Jr., said. The photos have not technically been "classified," a White House aide said, but they are being kept from public view. New Yorkers said they could not understand how a president who shares intimate snapshots from the White House could justify keeping these secret. "So we're not gonna see the fruits of this cruel joke?" said Frank Antonelli, 39, one of the Wall Street traders spooked by last week's flyover. "I'm not surprised. Obama... wouldn't further all the bad publicity by putting out those pictures."

update: now white house will release photo from flyover
from foxnews: The White House plans to soon release a photo from the controversial Air Force One-style flyover of Manhattan last week, despite claiming earlier that there was no need to release any official images from the incident. White House Press Secretary Robert Gibbs told reporters Wednesday that an internal report will probably be completed this week. "We'll release its findings and release a photo," he said. That was after Gibbs indicated Tuesday that the White House would not release any images. "I've watched CNN," he said at the time, noting the considerable coverage from amateur footage. "I didn't notice a lack of archival material from that flight." The flyover triggered panic among New Yorkers as well as the internal review by the Obama administration... White House Military Office Director Louis Caldera accepted responsibility and apologized for allowing the exercise.