scientists confirm water on the moon 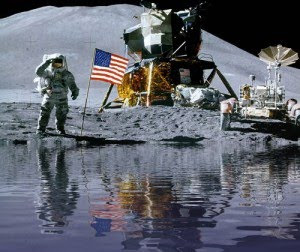 from theregister.co.uk: Analysis of the lunar surface by three different spacecraft has provided "unambiguous evidence" of water on the Moon, Space.com reports. India's Chandrayaan-1, NASA's Cassini spacecraft, and the agency's Deep Impact probe have all detected the presence of either water or hydroxyl - one hydrogen atom and one oxygen atom linked by a single bond. The NASA-built Moon Mineralogy Mapper (M3) aboard Chandrayaan-1 "detected wavelengths of light reflected off the surface that indicated the chemical bond between hydrogen and oxygen". The M3 suggested water/hydroxyl in the top few millimetres of the lunar surface - the limit of its penetrative capability - and detected a water signal which "got stronger toward the polar regions". Cassini passed by the Moon in 1999, en route to Saturn, and also noted a globally-distributed water/hydroxyl signal, once again stronger towards the poles.