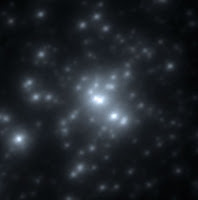 from ap: A huge ball of brightly burning gas drifting through a neighboring galaxy may be the heaviest star ever discovered - 100s of times more massive than the sun, scientists said Wednesday after working out its weight for the first time. Those behind the find say the star, called R136a1, may once have weighed as much as 320 solar masses. Astrophysicist Paul Crowther said the obese star - twice as heavy as any previously discovered - has already slimmed down considerably over its lifetime... it's burning itself off with such intensity that it shines at nearly 10 million times the luminosity of the sun.