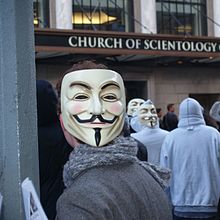 from io9.com: One of the weirdest historical confluences you can imagine took place in Pasadena, California, in the 1940s. There, a darkly handsome young man and chemistry autodidact named Jack Parsons had just made a bundle of money by inventing solid rocket fuel and selling it to the military. He was part of a group of explosion-obsessed researchers at CalTech who founded the Jet Propulsion Laboratory (JPL), where recently the Martian Rovers were made. He was also a goddess-obsessed acolyte and generous financial supporter of the infamous Pagan leader, Aleister Crowley.

Parsons used his defense contract money to convert an old mansion into a group house whose residents included other Pagans, artists, scientists, and writers. One of his boarders was a charismatic science fiction author named L. Ron Hubbard, who became Parsons' greatest frenemy, participating in rituals of sex magic with the rocket scientist, sleeping with his girlfriend, and finally absconding with all his money. Here is the true story of how Scientology and JPL were both conceived by men under the sorcerer Crowley's mystical influence.