joe the plumber? more like joe the keating family operative
from crooks & liars: I guess it’s no wonder John McCain was so happy to use “Joe the Plumber” as a debate prop last night – he’s a partisan Republican who also happens to be a member of McCain’s old friends, the Keating family.

From Martin Eisenstadt: “Turns out that Joe Wurzelbacher from the Toledo event is a close relative of Robert Wurzelbacher of Milford, Ohio. Who’s Robert Wurzelbacher? Only Charles Keating’s son-in-law and the former senior vice president of American Continental, the parent company of the infamous Lincoln Savings and Loan. The now retired elder Wurzelbacher is also a major contributor to Republican causes giving well over $10,000 in the last few years.”

Now I guess we know why Joe is telling the press that Obama is a “socialist” and that the Obama tax plan “infuriated” him. After all, it would hit families like the Keatings and their minions the hardest. Not to mention that Obama’s economic-recovery plan would put the crimps on influence peddlers like McCain’s old friends, the Keating Five. But he sure made for a good one-day story. 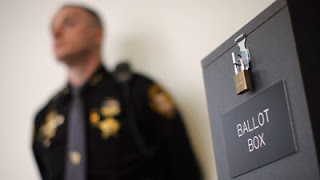 from sky: Eleven separate investigations have now been launched into a voter registration group called the Association of Community Organisations for Reform – or Acorn. The authorities believe they may have duplicated voter forms, employed convicts to register people and even stolen the names of the American football team the Dallas Cowboys in order to create fake voters. The suspicions started when authorities in Las Vegas raided the organisation’s offices, removing eight computer hard drives and several boxes of documents. Acorn called the raid “a stunt that serves no useful purpose other than discredit our work“. They suggested the investigations into them were politically motivated. But the concerns about dodgy election papers started to spread to other states. Authorities in Indiana said they had concerns about roughly a thousand voters registered by the group there. And Fox News reporters in the state of Missouri found 10 registration documents with the same name and signature. Acorn has registered up to 1.3 million voters across the US so far.

white powder causes evacuation of obama office
from raw replay: Fox 29 News reported: “There was a scare Tuesday at the South Philadelphia campaign headquarters of Democratic Sen. Barack Obama. The office at 15th and Christian streets was filled with volunteers around 5 p.m. when one of them brought in the mail and opened a letter that had a note and a powdery substance on it that immediately set off alarms… Examining the letter, investigators determined the substance was just harmless brown sugar. The all-clear was given by 5:50 p.m.”

from washington times: Democratic vice-presidential candidate Sen. Joseph R. Biden Jr. has paid more than $2 million in campaign cash to his family members, their businesses and employers over the years, a practice that watchdogs criticize as rife with potential conflicts of interest. The money largely flowed from the coffers of Mr. Biden’s failed presidential campaign during the past two years to a company that employs his sister and longtime campaign manager, Valerie Biden Owens, according to campaign disclosure filings. The senator from Delaware also directed campaign legal work to a Washington lobbying and law firm founded by his son R. Hunter Biden, the disclosures show.

‘barack osama’ appears on hundreds of absentee ballots in ny
from thinkprogress: The Albany Times Union reports today that Sen. Barack Obama’s (D-IL) “last name is spelled ‘Osama’ on hundreds of absentee ballots mailed out this week to voters in Rensselaer County,” New York. Both Democratic and Republican county election officials insist the error was a “honest mistake” and a “typo,” but the paper notes that “the letters ’s’ and ‘b’ are not exactly keyboard neighbors.” During the Democratic primary, Obama’s first name was misspelled on approximately 2000 absentee ballots in Florida.

from washington post: Joe Biden looks . . . different. Something about his eyes, which seem smaller, and his forehead, which seems smoother. Compared with images from last year, he seems better rested — yet also, strangely, a little sleepier… Karen Bradley, a University of Maryland professor who studies politicians’ body movement and what it conveys to voters, says it’s “a little strange that nothing moves from his eyes on up” — since she otherwise finds Biden a compelling communicator who powerfully telegraphs his conviction on a topic via other body language. Barry Cohen, a Rockville plastic surgeon, is more blunt. “He clearly has had Botox,” the doctor, a Republican, told us. “The lines are gone on his forehead. There is no way makeup or surgery could do that.”

obama joined socialist 3rd party in 90s
from blogger news: Democratic candidate Barack Obama was a member of the socialist New Party during the 1990s, according to new evidence unearthed by web bloggers, receiving the party’s endorsement for his state Senate run in 1996. Reports earlier this summer that Obama was associated with the New Party were vigorously denied by the Obama campaign and the New Party, but researchers examining Internet archives have found New Party documents clearly indicating Obama was a member of the party, received its endorsement, encouraged Party members to work with him in the Illinois statehouse, and signed a contract agreeing to maintain a relationship with the Marxist-led party during his senate term. The New Party was active in the United States from 1992 to 1998, and was strongly affiliated with Marxist and socialist organizations including the Democratic Socialists of America (DSA).

obama files to delay discovery in citizenship challenge
from total411: Here is the full motion PDF filed by Obama / DNC (1.2mb PDF) Here is the press release from thr people’s plaintiff at ObamaCrimes.com: “Philip J. Berg, Esquire, the Attorney who filed suit against Barack H. Obama challenging Senator Obama’s lack of ‘qualifications’ to serve as President of the United States, announced today that Obama and Democratic National Committee [DNC] filed a Joint Motion for Protective Order to Stay Discovery Pending a Decision on the Motion to Dismiss (which was) filed on 09/24/08.” While legal, Berg stated he is “outraged as this is another attempt to hide the truth from the public; it is obvious that documents do not exist to prove that Obama is qualified to be President.” The case is Berg v. Obama, No. 08-cv-04083.

did ayers ghostwrite obama’s book?
from worldnetdaily: Prior to 1990, when Barack Obama contracted to write Dreams From My Father, he had written very close to nothing. As an undergraduate, Obama had written what he justifiably calls some “very bad poetry.” He published nothing under his own name in The Harvard Law Review, where he served as an editor and as president. And after leaving Harvard, he published nothing in its review or in any law journal. Then, in 1995, this untested 33 year-old produced what Time Magazine has called – with a straight face – “the best-written memoir ever produced by an American politician.” The public is asked to believe Obama wrote this on his own. I do not buy this canard for a minute, not at all. In writing a book on intellectual fraud, Hoodwinked, I developed an eye for literary humbug, and Dreams serves up an eyeful.

from total411: The Obama campaign has taken to designing differentiated versions of its logo for different identity groups. One website, Logobama.com, even offers anyone the chance to design your own Obama logo. Some have commented on the similarity between the logo for the terrorist group the Weathermen (co-founded by Obama’s friend Bill Ayers), to the logo for the Obama campaign. We at Total411.info have used the good offices of Logobama.com to create the following Obama/Weatherman hybrid logo, so all the Weathermen supporters of Obama can show their pride. Also check out the unadulterated Obama logo and the Weatherman logo as it appears on the cover of Ayers’ book for comparison purposes.

mccain addresses crowd as ‘my fellow prisoners’
from thinkprogress: The Jed Report notes that in a rally today, Sen. John McCain referred to his audience as “my fellow prisoners“: “Across this country, this is the agenda I have set before my fellow prisoners. And the same standards of clarity and candor must now be applied to my opponent.”

olbermann slams mccain’s connections to bonafide eugenicists, racists & fascists
from infowars: Partisan Keith Olbermann argues that if Obama is attacked for his connections to the Rev. Jeremiah Wright and Weatherman William Ayers, then the corrupt connections of John McCain, including bonified racists, fascists and eugenicists, also deserve to come under fire. Olbermann names the U.S. Council for World Freedom and a number of controversial fellow board members connected to McCain.

foo fighters demands mccain stop using their music
from thinkprogress: Throughout the campaign season, Sen. John McCain’s presidential campaign has continually drawn the ire of musicians by using their copyrighted material without permission. Now yet another band is complaining. Yesterday, the Foo Fighters issued a statement telling McCain to stop using their song “My Hero“: “The saddest thing about this is that `My Hero’ was written as a celebration of the common man and his extraordinary potential,” the band said in a statement. “To have it appropriated without our knowledge and used in a manner that perverts the original sentiment of the lyric just tarnishes the song.” As ThinkProgress has previously noted, McCain’s continual copyright infringement contradicts his campaign pledge to protect “copyrighted works.”

palin abused power in troopergate firing
from ap: Sarah Palin unlawfully abused her power as governor by trying to have her former brother-in-law fired as a state trooper, the chief investigator of an Alaska legislative panel concluded Friday. The politically charged inquiry imperiled her reputation as a reformer on John McCain’s Republican ticket. Investigator Stephen Branchflower, in a report to a bipartisan panel that looked into the matter, found Palin in violation of a state ethics law that prohibits public officials from using their office for personal gain.

precocious youngster sells cookies to buy attack ad
from onion: In this installment of Beyond The Facts, a precocious 8-year-old girl participates in grown-up politics by spreading smears and lies.