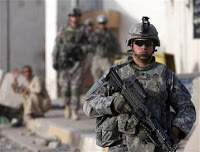 from ap: Washington and Baghdad have reached a final agreement after months of talks on a pact that would require U.S. forces to withdraw from Iraq by 2011, U.S. and Iraqi officials said on Wednesday.

The bilateral pact replaces a U.N. Security Council resolution enacted after the U.S. invasion of Iraq in 2003 and will give Iraq's elected government authority over the U.S. troop presence for the first time.

Iraq said it had secured the right to prosecute U.S. soldiers for serious crimes under certain circumstances, an issue both sides had long said was holding up the pact.

The agreement was submitted to Iraqi political leaders for approval, a first step toward ratifying it in the Iraqi parliament, Iraqi government spokesman Ali al-Dabbagh said.