from ap: Two white supremacists allegedly plotted to go on a national killing spree, shooting and decapitating black people and ultimately targeting Democratic presidential candidate Barack Obama, federal authorities said Monday. In all, the two men whom officials described as neo-Nazi skinheads planned to kill 88 people — 14 by beheading, according to documents unsealed in U.S. District Court in Jackson, Tenn. The numbers 88 and 14 are symbolic in the white supremacist community.

obama prospects fueling white supremacists hate
from raw replay: ABC’s Bob Ross talked to Steven Edwards of Muhlenberg County, Kentucky, who is considered the leader of the Supreme White Alliance. Edwards said that the Supreme White Alliance is a social club that doesn’t hate. Brian Ross found that Edwards and his group have different views in private. This video is from ABC’s Nightline, broadcast October 29, 2008.

biden again mentioning 'new world order'
from canada free press: Biden: "This is the most important election in the public’s life. They are looking at these races very closely. I think this is going to be much closer than everyone thinks it is. Second, with regard to the Democratic Party, this is a new Democratic Party not the party of the 70s and 80s. This is a party that has adjusted to the realities of a new world order... I think there is going to be a collaborative effort to make the 21st century an American century.”

from threat level: The Obama campaign has been building, tweaking and tinkering with its technology and organizational infrastructure since it kicked off in February 2007, and today has most sophisticated organizing apparatus of any presidential campaign in history. Previous political campaigns have tapped the internet in innovative ways — Howard Dean's 2004 presidential run, and Ron Paul's bid for this year's Republican nomination, to name two. But Obama is the first to successfully integrate technology with a revamped model of political organization that stresses volunteer participation and feedback on a massive scale, erecting a vast, intricate machine set to fuel an unprecedented get-out-the-vote drive in the final days before Tuesday's election.

obama 'infomercial' focused on the economy

from mcclatchy: Barack Obama will focus on the economy and how his tax plans would help the middle class in a half-hour political infomercial Wednesday night. The program, scheduled to run on television networks on the 79th anniversary of the stock-market crash of 1929, "will share the specifics of Obama's plans to turn the economy around and get the country back on track," campaign spokesman Bill Burton said Tuesday. "We want to make sure every voter heading into the voting booth knows exactly what Barack Obama would do to bring about fundamental change as president," he said.

video: obama 'redistribution of wealth' audio uncovered
from youtube: Obama Bombshell Audio Uncovered. He wants to Radically Reinterpret the Constitution to Redistribute Wealth!! In a 2001 Chicago Public Radio Interview Obama is discussing the best way to bring about a Redistribution of Wealth!!! This Video Exposes the radical underneath the rhetoric!!!

obama: 'marxist' front man for the banksters
from kurt nimmo: Is Barack Obama a Marxist, will he redistribute the wealth to the middle class? This is the question a WFTV anchor posed to Joe Biden. It was of course an absurd question, considering Obama is the bankster candidate of choice. Banksters do not “redistribute” the wealth downward, they direct it upward into their own coffers. In fact, the word is not even accurate. It is not “redistribution,” it is theft. The banksters are grand theft larcenists on a monumental scale. Karl Marx’s ideology was a historical ruse, a stratagem for the ruling elite. Marx was related to the Rothschild family. Nathan Mayer Rothschild married Hannah Barent-Cohen, daughter of Levi Barent-Cohen and wife Lydia Diamantschleifer and paternal granddaughter of Barent Cohen and wife, whose other son Salomon David Barent-Cohen married Sara Brandes, the great-grandparents of Karl Marx. “Nathan Rothschild had given Marx two checks for several thousand pounds to finance the cause of Socialism. The checks were put on display in the British Museum, after Lord Lionel Walter Rothschild, a trustee, had willed his museum and library to them,” argues David Rivera in Final Warning: A History of the New World Order. But even if Rothschild had nothing to do with his relative Karl Marx, the political philosophy of Marxism was custom-built for the banksters... No wealth will be spread to the beleaguered middle class, as advertised. No tax cuts will be forthcoming. After Obama is anointed, the engineered economic crisis will intensify and Obama the sock puppet for the banksters and Wall Street will demand wholesale sacrifice on the part of the plebs. His CFR connected wife said as much earlier in the year. Obama, the foundation financed wunderkind shepherded by the advocate of globalist primacy, Zbigniew Brzezinski, indeed has nothing but contempt for the American people and that is why he was groomed to lead, or rather take orders.

rep. steve king: obama will make US a ‘totalitarian dictatorship’
from thinkprogress: On Saturday, Rep. Steve King (R-IA) gave little-noticed remarks at Sioux City’s West High School during an appearance by Gov. Sarah Palin (R-AK). King went beyond the traditional right-wing talking points - which brand Obama a “Marxist” who adheres to “socialism” - and said that he would turn the United States into a “totalitarian dictatorship.” From a report by the Iowa Independent: "King, known for provocative, partisan remarks, suggested Obama actually could be classified as even more extreme than a socialist. King also said his party is the only one with a legitimate claim on representing freedom as Americans know it. “When you take a lurch to the left you end up in a totalitarian dictatorship,” King said. “There is no freedom to the left. It’s always to our side of the aisle.”

fed judge throws out berg's suit against obama
from philadelphia daily news: A federal judge in Philadelphia [on Oct24] threw out a complaint by a Montgomery County lawyer who claimed that Democratic presidential candidate Barack Obama was not qualified to be president and that his name should be removed from the Nov. 4 ballot. Philip J. Berg alleged in a complaint filed in federal district court on Aug. 21 against Obama, the Democratic National Committee and the Federal Election Commission, that Obama was born in Mombasa, Kenya. Berg claimed that the Democratic presidential standard bearer is not even an American citizen but a citizen of Indonesia and therefore ineligible to be president.

update: mr. berg goes to washington
from obamacrimes.com: Philip J. Berg Will Be Arriving U.S. Supreme Court, Washington, DC at 3:15 p.m. today to file for an Injunction to Stay Presidential Election Pending Writ of Certiorari regarding Obama who is "NOT" qualified to be President of the United States.: Press Release 10 30 2008 Berg Filing Injunction to Stay Presidential Election.pdf

obama build's his white house team
(all by himself, i bet)
from nytimes: With the economy in tatters at home and two wars still raging abroad, Senator Barack Obama’s team is preparing for a fast start, should he win the election, to what could be the most challenging and volatile transition between presidents in 75 years. Mr. Obama’s advisers are sifting résumés, compiling policy options and discussing where to hold his first news conference as president-elect. Democrats say Mr. Obama hopes to name key members of his White House, economic and security teams soon after the election. His transition chief has even drafted a sample Inaugural Address. Presidential nominees typically start preparing for transitions before the election, but Mr. Obama’s plans appear more extensive than in the past and more advanced than those of Senator John McCain, his Republican opponent. Mr. McCain has also assigned confidants to prepare for a transition but instructed them to limit their activities as he tries to rescue his foundering campaign, Republicans said.

obama fascism?
from daily dose of terror: This past Friday I was at the University of Vermont for an anti-war rally where I held a giant sign reading ARREST OBAMA. The visceral vitriol among the students was omnipresent. That I had criticized Obama, the Messiah, FROM THE LEFT, was an unpardonable offense. I had info with Obama's pro-war voting record and outlining that he supports George Bush on the Global War on Terror, but that did not matter. He was a candidate for "change" - the TV commercials said so. No discussion that's final. What I came away with that afternoon was a palpable fear of a blind unthinking mass of Obama supporters. How is this any different than the Bush flagwavers? As Webster Tarpley has argued, historically Fascism did not emerge from a top down hierarchy, it arose from "the Left". I tried to argue with the students that elections were staged and Obama was a robot assembled in Brzezinski's laboratory to read P.R. scripts. The students could not fathom that the alleged opposition was a wing of the same bird. This is not some academic exercise. My friend was arrested here in my city after asking questions during a heated exchange to an Obama political table and faces jail time. Could an Obama presidency deliver Fascism here in the United States? When the market collapses and people have no jobs and are hungry, will the mobs be ready to organize? I am just raising questions to be asked during some very strange and scary times. Stay tuned... 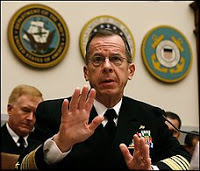 from washington post: The U.S. military, bracing for the first wartime presidential transition in 40 years, is preparing for potential crises during the vulnerable handover period, including possible attacks by al-Qaeda and destabilizing developments in Iraq or Afghanistan, according to senior military officials. "I think the enemy could well take advantage" of the transfer of power in Washington, said the chairman of the Joint Chiefs of Staff, Adm. Michael Mullen, who launched preparations for the transition months ago, and who will brief the president-elect, the defense secretary nominee and other incoming officials on crisis management and how to run the military. Officials are working "to make sure we are postured the right way around the world militarily, that our intelligence is focused on this issue, and in day-to-day operations the military is making sure it does not happen," Mullen said in an interview. "If it does happen, we need to be in a position to respond before and after the inauguration."