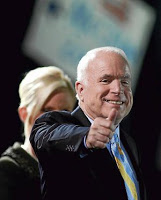 from politico: Sen. John McCain (R-Ariz.) said Sunday on NBC’s “Meet the Press” that he can “guarantee” a win on Nov. 4 in a squeaker victory that won’t be clear until late that night. McCain spoke amid signs of a tightening race, and reports of renewed determination among his staff, which is badly outgunned in both money and manpower. “I guarantee you that two weeks from now, you will see this has been a very close race, and I believe that I’m going to win it,” McCain told interim “Meet” moderator Tom Brokaw. “We’re going to do well in this campaign, my friend. We’re going to win it, and it’s going to be tight, and we’re going to be up late.” McCain was down just 5 points in the Reuters/C-SPAN/Zogby poll released Sunday, with Sen. Barack Obama (D-Ill.) leading by 49 percent to 44 percent among likely voters in the daily tracking poll, which has a margin of error of 2.9 points. Reuters reported that Obama’s lead has dropped over the last three days after hitting a high of 12 points on Thursday. Pollster John Zogby said: “Things are trending back for McCain. His numbers are rising and Obama’s are dropping on a daily basis. There seems to be a direct correlation between this and McCain talking about the economy.”

from paul joseph watson: John McCain’s presidential running mate Sarah Palin, much to the bewilderment of the 9/11 truth community, seemingly expressed support for a new investigation into the terrorist attacks during a rally in Ohio last week. Asked by We Are Change Ohio, “Do you support the family members and first responders who are calling for a new 9/11 investigation?,” Palin responded, “I do… I do because I think that helps us get to the point of never again, and if anything that we could do could still complete that reminder out there,” the Alaska Governor added. Palin was aware of the context because she then asked the cameraman if he had been affected by 9/11. Of course, one would have to be incredibly naive to think that Palin, at best a befuddled Republican poster child and at worst another establishment Neo-Con, would follow through on her support and back a new 9/11 investigation should John McCain snatch victory from the jaws of defeat and take the White House.

scare tactics mark final election days
from washington times: In these last desperate days of the 2008 presidential campaign, we must suffer visions of “divas,” plumbers, skinheads and Karl Marx dancing before our disbelieving eyes. Karl Marx? Has it come to that arcane scare tactic? We’ve been promised that this election would be different: It would be about character, experience, qualifications and maybe even issues, such as our tanking economy. But in this final week, the telebabble is going to be about stupid stuff, speculative stuff and scary stuff.

war or peace? the world after the 2008 US presidential election
from richard c. cook: World war or world peace is the blunt choice that will face either Barack Obama or John McCain when one of them is elected president of the United States on Tuesday, November 4, 2008. For a major eruption of violence to be averted, the new president must deal positively with the reappearance of Russia on the world stage, the emergence of China as an economic force, and the aspirations of all the nations on earth for a decent and secure way of life. Making matters much more dangerous are the ongoing financial crisis, along with what appears to be the start of a worldwide economic recession of as yet undetermined depth and duration. It is Europe, not the U.S., from which proposals are emerging for a transformative approach to the most compelling issues. But will it be enough? … Those with eyes to see knew the present crisis was coming long ago. That vision now has spread to more people. What is increasingly clear is that positive change, as opposed to the change that is just a drift to disaster, will only happen when people who love freedom demand it, work for it, and sacrifice for it. Will the next president of the United States facilitate such change or stand in its way?

wv gives es&s an award while their machines malfunction

from threat level: A day after West Virginia secretary of state Betty Ireland held a press conference to address vote-switching problems with touchscreen voting machines made by Election Systems & Software, she presented an award of merit to an ES&S vice president, who had abruptly and mysteriously left the company in May after 11 years of service, according to the Charleston Gazette. Gary Greenhalgh, as ES&S’s vice president of sales, helped the company win a $17-million contract to supply machines to West Virginia in 2005 and was the company’s point person for dealing with election officials until he left ES&S. Last week, Ireland gave him a Medallion Award from the National Association of Secretaries of State at a special ceremony. The award came the same week that voters in several West Virginia counties reported that ES&S’s iVotronic touchscreen machines were flipping their votes from Democratic presidential candidate Barack Obama to Republican rival John McCain. Ireland addressed the problem by directing the 34 West Virginia counties that use the touchscreen machines to re-calibrate them each morning during early voting and on election day. 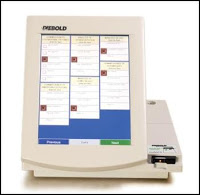 from threat level: Several election watch dog groups have sent an advisory to election officials warning them about a problem with Premier Election Solutions’ vote tabulating software that could cause the system to lose votes. Premier (formerly called Diebold Election Systems) disclosed the problem in August after officials in Butler County, Ohio, discovered that 150 votes were dropped from a memory card during the state’s March primary. Ten other Ohio counties discovered their system had dropped votes as well when vote totals on the memory card were uploaded to a county server. The problem occurred when officials tried to upload multiple memory cards at once. All of the votes were recovered, but Ohio officials had to expend considerable time and energy to retrieve them and make sure all were accounted for.

I see dead people…voting
from 620kpoj: A Portland think tank says Oregon voter rolls include 6,000 dead people. Secretary of State Bill Bradbury says most are just inactive voters. The Cascade Policy Institute reported last week that state voter rolls include the names of 6,000 dead people. Secretary of State Bill Bradbury says not to worry, dead people can’t sign a ballot and forging a ballot is a Class “C” Felony. Bradbury says election officials investigated the charges and found of the 6,000 names over 4900 were inactive registrants. A voter may be deemed inactive if they have moved and not updated their info or have not voted in 5 years. Inactive voters do not recieve a ballot by mail. Bradbury says of the remaining 1100 active voters a random sampling revealed about half of those were alive and kicking.

attorney: voter fraud as likely as alien abduction
from raw replay: CNN’s Susan Roesgen reported that the Wisconsin Attorney General is fighting to have voters registrations purged from the rolls if their registration information does not match with other government databases. Attorney General J.B. Van Hollen’s case was dismissed last week but he plans to file an appeal.

5 top national security research challenges for the next president
from threat level: (Drew Conway is a doctoral candidate at New York University, studying international conflict and terrorism. He blogs at Zero Intelligence Agents. This is his first post for Danger Room) While everybody else is focused on next week’s presidential election, I took some time today to consider what scientific research might have the most impact on national security over the next four years — no matter who is in the White House… 1-Quantum Cryptography, 2-Applications for Genetic Algorithms in Battlefield Operations, 3-Multi-layered Network Dynamics, 4-Defining the Defense Department’s and Intelligence Community’s Presence in Cyberspace & 5-Hardening of Biometric Data Collection and Analysis

the 10 worst presidents to have held office

this is the 2nd coup: a blistering interview with james cromwell

from suicidegirls: “Put Cheney in jail. That would be more appropriate. I do believe that if that woman wins in Vermont, the attorney general, she will. Bugliosi’s book is the blueprint for how. I believe that what happened on September 11th was a crime against the American people and should have been pursued by law enforcement in a rational way. Then we would have Osama bin Laden — if in fact Osama bin Laden is responsible — behind bars. It was used as an excuse for a coup — the second in my lifetime, the first one being at the death of JFK. This is the second coup, the destruction of American democracy. We need the men who have perpetrated this coup behind bars where they belong, as a lesson to other despots, that they cannot behave this way!“

this is what it looks like when a candidate tells the truth
from winter patriot: If you live in California’s 14th Congressional district, you have an opportunity that is – tragically – unavailable to most other Americans. You can vote for a Congressional candidate who has the courage — and the knowledge — to say the things that Democrats would say if they really represented Change, or Hope, or even Audacity: