israel, US storm out of UN nuclear forum
from haaretz: The Israel and U.S. delegations walked out of the United Nations' disarmament forum in Geneva, Switzerland yesterday after Iran said Israel was the "real source of nuclear danger in the Middle East" and had a "dark record of crimes."

from jerusalem post: The United Nation's Human Rights Council is expected to place Israel under permanent investigation for its "violations" of international law in the territories - until such time as it withdraws to the pre-1967 border - according to Hillel Neuer, executive director of UN Watch.

naked, drunk, surrounded by sex toys -
it's the israeli ambassador! 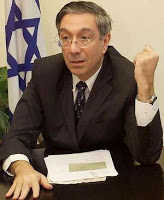 from guardian: As an Israeli ambassador, Tsuriel Raphael was accomplished at putting a gloss on delicate subjects, be it Tel Aviv's nuclear programme, the treatment of Palestinians or the invasion of Lebanon.

When San Salvador police discovered him in his official embassy residence yard in the capital San Salvador, however, smooth talk was not really an option. For starters there was the gag and the rubber ball in his mouth. There was also the matter of being drunk. And naked. And bound. And surrounded by sex toys.

Once he was untied and the gag and ball were removed Mr Raphael identified himself as the ambassador but for perhaps the first time in his diplomatic career, this was a crisis he could not explain away.