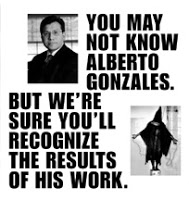 white house may be turning on gonzales

from raw story: Embattled Attorney General Alberto Gonzales says that he won't resign, but his fate is out of his hands, a New York Times article reveals.

Gonzales acknowledged that "mistakes were made" in his handling of the dismissal of several U.S. Attorneys, a case that has put the nation's chief law enforcement officer in the hot seat.

The Times article reveals that Republicans close to the Bush administration perceive "a growing rift between the White House and the attorney general," Sheryl Gay Stolberg and Jeff Zeleny write.

"Mr. Gonzales has long been a confidant of the president but has aroused the ire of lawmakers of both parties on several issues, including the administration's domestic eavesdropping program," Stolberg and Zeleny continue.

The anonymous Republicans referenced in the article "said top aides to Mr. Bush, including Fred F. Fielding, the new White House counsel, were concerned that the controversy had so damaged Mr. Gonzales's credibility that he would be unable to advance the White House agenda on national security matters," which includes the prosecution of terror suspects.

"I really think there's a serious estrangement between the White House and Alberto now," Stolberg and Zeleny quote one of the Republicans.

Gonzales himself seemed to acknowledge this himself, saying today that it's up to the President as to whether he retains his position.

"I work for the American people and serve at the pleasure of the president," Merrill Hartson quotes Gonzales for The Associated Press.