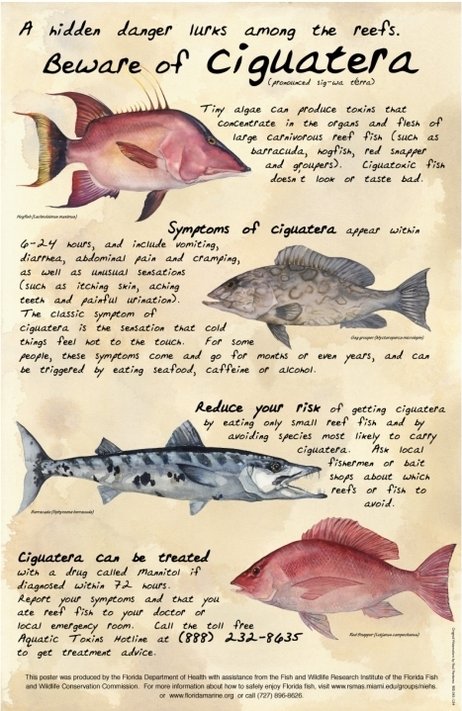 from npr.org: Twenty-five years ago, two pals went out for a seafood dinner while vacationing in the Bahamas. What could be better than some fresh grouper steaks and a night on the town without the wives? Um, plenty. A few hours after dinner, the men started having stomach pains and diarrhea. Their legs began to tingle and burn. And their sense of temperature went haywire: Ice felt hot while fire felt cool. All the while, their wives were completely fine — until they had sex with their hubbies.

The men had ingested a potent fish toxin, a team of doctors wrote at the time in the journal Clinical Toxicology. And they had passed the poison along to their wives through their semen, the doctors hypothesized. For several weeks, the women had terrible pain and burning in their pelvis.

With fish now imported to the U.S. from all over the world, the toxin has since appeared outside its endemic tropical regions — in Vermont, North Carolina and New York. Some researchers are now worrying that warming seas could make the poison even more common. The toxin causes the strange foodborne illness, known as ciguatera fish poisoning. The molecules open little holes in nerves, triggering an array of crazy symptoms: reversal of how you experience temperature, vertigo and the sensation that your teeth are falling out.