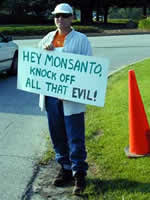 from independent: Genetically modified potatoes developed by Monsanto, the multinational biotech company, have been fed to sick patients in an experiment. Rats that ate similar potatoes in the research suffered reductions in the weight of their hearts and prostate glands.

Dr Michael Antoniou, reader in molecular genetics at Guy’s, King’s and St Thomas’ School of Medicine, said use of humans was “irresponsible and totally unethical, especially when already ill subjects were enrolled. These people truly were guinea pigs.” Other scientists said the trials were too short, on too few people, to give meaningful results of long-term effects.

Monsanto said the vegetables were safe, and the researchers conducting the experiment said effects on the rats were within “permissible” limits.

The experiment is described in a hitherto unpublished report by the Nutrition Institute of the Russian Academy of Medical Science, done “by agreement with Monsanto Company” in 1998.