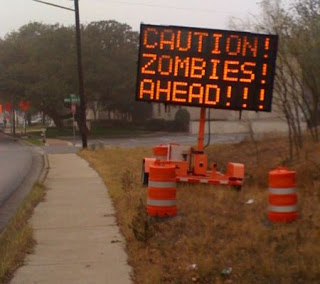 from statesman: Someone reprogrammed two city construction road signs near the University of Texas early Monday morning in an attempt to warn Austin of an imminent zombie attack. Messages that typically alert Lamar Boulevard drivers to a detour for Martin Luther King Jr. Boulevard splashed several warnings like “Caution! Zombies Ahead!” and “Nazi Zombies! Run!!!”... The biggest safety hazard came from drivers slowing down or stopping their car to take pictures, Jones said. The hacking occurred within weeks of various articles appearing online with descriptions of how to hack into these road signs — which point out that such an act is illegal... “It’s a pretty childish prank,” he said... No zombies have been seen in the area, and with any luck, Tuesday night’s cold front killed off any undead with ghoulish plans to invade the city.