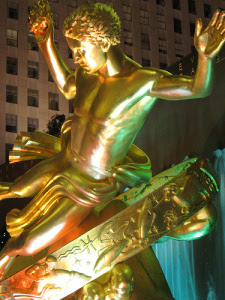 from VigilantCitizen.com: “How can the site of the most famous skating rink in the world be considered sinister? You know the one that’s in all romantic comedies…the best first date activity ever!?  And what about that huge Christmas tree that we see in ALL holiday movies? That’s not sinister, that’s magical!”

"If that’s what you’re thinking right now, you should probably press pause on your “You’ve Got Mail” Deluxe Edition DVD  and read on. If you’re not surprised that a center called “Rockefeller” contains tons of occult and even Luciferian symbolism, as well as references to a New World Order, then you should also read on because I will reinforce what you’re already thinking, and everybody likes that.
This complex of 19 commercial buildings is situated between Fifth and Seventh avenues in New York City and is famous for its Art Deco style. It is one of the last building projects in the United States to have incorporated a program of public art. The submissions chosen all fit a particular philosophy and some artists have been asked to change their work so it fits the theme of the Rockefeller center which is: Luciferianism."