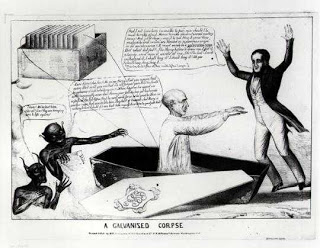 A National Geographic documentary will air next year featuring "deviant burial" find, according to an Irish Examiner article, "Skeletons reveal our ancestors' fear of the undead". "The skeletons from Co Roscommon date to some time in the 700s, long before vampires emerged in European folklore, but at a time when communities believed revenants, or ghosts, came back from the grave to haunt loved ones or harass those who bore them a grudge while living." The unique find in historic County Roscommon site, the childhood home of Hollywood Legend Maureen O'Sullivan, is the result of an archeology project to excavate graves funded by the Royal Irish Academy.

The word Revenant is derived from Latin word, "revenans", which means returning. "There is a tradition of revenants in Irish folklore. It has been suggested that Bram Stoker got the inspiration for Dracula not from a Romanian folk tale but from an Irish legend about an evil chieftain who had to be killed three times after he came back looking for a bowl of blood to sustain him," according to the Irish Examiner article. The documentary reveals steps were taken in medieval times to prevent corpses from rising out of their graves, stones wedged in jaws of the two skeletons of a younger and older man in the burial find were examples of such measures.  Wikipedia provides interesting stories written by William of Newburgh in the 12th Century of other medieval cases as a warning to posterity.