Skilled Work – Without The Workers 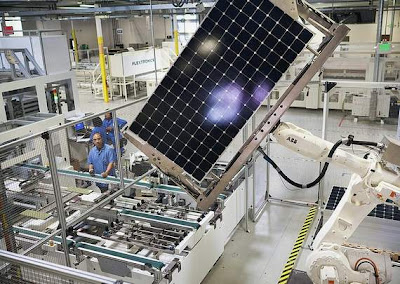 from nytimes.com: At the Philips Electronics factory on the coast of China, hundreds of workers use their hands and specialized tools to assemble electric shavers. That is the old way.

At a sister factory in the Dutch countryside, 128 robot arms do the same work with yoga-like flexibility. Video cameras guide them through feats well beyond the capability of the most dexterous human.

One robot arm endlessly forms three perfect bends in two connector wires and slips them into holes almost too small for the eye to see. The arms work so fast that they must be enclosed in glass cages to prevent the people supervising them from being injured. And they do it all without a coffee break — three shifts a day, 365 days a year.

All told, the factory here has several dozen workers per shift, about a tenth as many as the plant in the Chinese city of Zhuhai.

This is the future.

A new wave of robots, far more adept than those now commonly used by automakers and other heavy manufacturers, are replacing workers around the world in both manufacturing and distribution. Factories like the one in the Netherlands are a striking counterpoint to those used by Apple and other consumer electronics giants, which employ hundreds of thousands of low-skilled workers.

“With these machines, we can make any consumer device in the world," said Binne Visser, an electrical engineer who manages the Philips assembly line in Drachten.