small asteroid flew past earth on 10/16 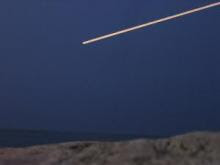 from space.com: A small asteroid will buzz the Earth late Friday EDT, flying just inside the orbit of the moon. It should pass safely by our home planet, according to a crack team of NASA space rock trackers. The space rock, named 2009 TM8, was just discovered Thursday by the Catalina Sky Survey in Arizona. It will get within 216,000 miles of Earth when it zooms by at a speed of about 18,163 mph. "That's slightly closer than the orbit of our moon," NASA's Asteroid Watch team said Friday via Twitter. The time of closest approach will be 11:44 p.m. EDT tonight. The asteroid hunters at the Jet Propulsion Laboratory (JPL) in Pasadena, Calif., stands on constant watch for rogue space rocks that could pose an impact risk to Earth. It was the same team which, last week, scaled back the risk of another asteroid — a large space rock called Apophis — hitting the Earth in 2036.