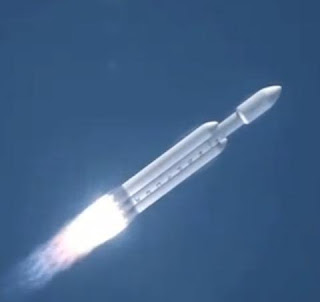 Are launch costs too high and weighing down your bottom line? Elon Musk, Space X founder, pitches his Falcon Heavy booster as right for the job to lift your prospects! In a Discovery News article, Musk says, "...we can realistically start to contemplate missions like a Mars sample return, which requires a tremendous amount of lift capability because you have to send a lander to Mars that still has enough propellant to return to Earth." Planetary Science Blog notes, the Falcon Heavy is second only to the Saturn V rocket in payload and escape velocity. The article adds 20-25 percent of mission cost is in the launch and idea of lowering your costs from $10,000 to $1,000 per pound a major selling point! A debut flight is scheduled for Vandenberg AFB in 2013. You can visit the Falcon Heavy webpage at the Space X website for more details. The sales pitch is a familiar one--"more bang for the buck"-- but will bottomline decisions translate into space exploration success? Do you trust companies and corporations to do the right thing in space?