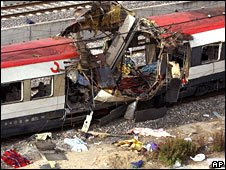 from afp: Spain's supreme court Thursday overturned the convictions of four of 21 people condemned to prison over the Madrid train bombings that killed 191 people in 2004. It also upheld a lower court's decision to acquit one of the alleged masterminds of the Al Qaeda-inspired attacks, Rabei Ousmane Sayed Ahmed, known as "Mohammed the Egyptian". The early morning bombings on four packed commuter trains on March 11, 2004 were the deadliest terror attacks in the West since the September 11, 2001 strikes against the US.

from kurt nimmo: Note: the attack is no longer considered the direct handiwork of al-Qaeda but is rather an “al-Qaeda inspired attack.” Back in March, 2004, the corporate media resoundingly declared al-Qaeda to be responsible...

In other words, according to Spain’s Supreme Court, these people did not belong to a terrorist group, at least not an Islamic terrorist group. Apparently, there was not enough evidence to stay the conviction of “Mohammed the Egyptian,” said to be the ringleader, and his conviction was thrown out as well...

As it turns out, Trashorras and a compatriot, Antonio Toro, were government informants, a fact reported by the New York Times and the Times Online. Toro was recently handed a four-year prison for transporting explosives.

The History Commons on the Cooperative Research website notes the following:

It is revealed that the man accused of supplying the dynamite used in the March 2004 Madrid train bombings was an informant who had the private telephone number of the head of Spain’s Civil Guard bomb squad.

In short, Trashorras and Toro are patsies and the evidence indicates the Spanish Civil Guard bomb squad was behind the bombing and a phantom “al-Qaeda inspired” terrorist group was simply a contrivance designed to feed public hysteria.