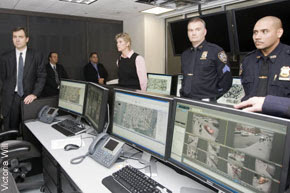 the big apple's eyeing you

from nypost: They're watching you. The NYPD's plan to have 5,000 cameras trained on every sidewalk crack south of Canal Street has begun in a space-age hub that will be operating by the end of the month. The "Ring of Steel" command center - which will keep 24-hour watch on high-profile targets like the World Trade Center site, the Stock Exchange and the Brooklyn Bridge - is on the 28th floor of a nondescript building at 55 Broadway. Modeled after a highly touted network in London, the $89 million Lower Manhattan Security Initiative will fight crime and terrorism by blanketing the 1.7 square miles with 500 cameras. The feds will pick up $70 million of the cost. Police intend to be using 2,000 cameras by 2009 and 3,000 by 2011. They also hope to tap into images from an additional 2,000 private cameras.

id card on track says uk govt
from zdnet: This just in on the ongoing ID Card issue. (BTW Bruce Schneier says we shouldn't get all hot and bothered over ID cards as they are just a temporary technology before unseen biometrics take over) Here is the government release in full for you to chew over: Identity card delivery on time and on budget announces Home Secretary

fbi finds most terrorism threat reports baseless
from reuters: The FBI tracked about 108,000 potential terrorism threats or suspicious incidents from mid-2004 to November 2007, but most were found groundless, a Justice Department review found on Friday. The department's office of inspector general gave the figure in an audit of the FBI's terrorism case-tracking system, called Guardian, launched in 2002 after the September 11 attacks. "The FBI determined that the overwhelming majority of the threat information documented in Guardian had no nexus to terrorism. However, as a result of information reported in Guardian the FBI initiated over 600 criminal and terrorism-related investigations from October 2006 to December 2007," the inspector general's report said. The report did not discuss the result of the investigations.
The Federal Bureau of Investigation's Terrorist Threat and Suspicious Incident Tracking System, Audit Report 09-02, November 2008 (1.3mb PDF)

kbr to provide power during emergencies
from upi: The U.S. Army Corps of Engineers has contracted KBR to provide power during emergency or disaster situations. U.S. company KBR was awarded a $75 million deal from the Army Corps or Engineers for disaster relief services. Under the contract, KBR will supply emergency power for the Western region of the United States in case of a natural or manmade disaster. KBR officials say during an emergency situation they will provide labor, transportation and equipment, among other services, to support power requirements for designated critical public facilities. "This award allows KBR the opportunity to expand our capabilities portfolio in the government and infrastructure business to include emergency response, an area of growth due to recent natural disasters," Bruce Stanski, KBR government and infrastructure president, said in a statement. "We look forward to continuing our relationship with the U.S. Army Corps of Engineers in this new area and are committed to providing the premier services the Army Corps has come to expect of KBR."

spitzer won't face charges for scandal
from washington post: Former New York governor Eliot L. Spitzer will not face criminal charges for his role in a prostitution scandal that drove him from office this year, prosecutors announced yesterday. [nov6] Investigators for the FBI and the Internal Revenue Service uncovered no evidence that Spitzer had misused public or campaign money to pay women employed by the Emperors Club VIP, a high-priced New York prostitution ring.

byrd steps down as chair of appropriations committee
from thinkprogress: Sen. Robert Byrd (D-WV) announced today [nov7] that he will voluntarily step down as chairman of the Senate Appropriations Committee on Jan. 6. Byrd, who is the longest-serving senator in American history, said in a statement that he made the decision “only after much personal soul searching, and after being sure of the substantial Democratic pickup of seats in the Senate. I am now confident that stepping aside as chairman will not adversely impact my home state of West Virginia,” he said. Democrats had been hoping that Byrd would “step aside voluntarily” due concerns that he was “not up to the immense challenges he would face in that job.” Byrd will be replaced by Sen. Daniel Inouye (D-HI)

newspapers seek gov't documents in anthrax inquiry
from ap: Two newspapers asked a federal judge Wednesday to make public several documents relating to a former Army scientist who was named as a person of interest in the 2001 anthrax attacks and later exonerated. The New York Times and the Los Angeles Times want the government's search warrants and supporting documents involving Stephen Hatfill, who was eventually cleared in the anthrax attacks and was awarded $5.8 million in a lawsuit accusing the Justice Department of violating his privacy. Normally, search warrants would be sealed for a person who has not been charged or indicted, lawyers said. But the public has a right to know why investigators wanted to search Hatfill's home and on what basis the courts agreed to allow those searches, the newspapers argued in U.S. District Court. "The public has a right to know why he was targeted," said Jeanette Melendez Bead, lawyer for the newspapers.

new rule kicks patriot act foes 'right in the teeth'
from raw story: The Bush administration has been planning since last spring to issue a final burst of federal regulations just before leaving office. It was recently announced that over 90 new regulations would be finalized before November 22 - 60 days prior to the end of Bush's term - making them difficult, though not impossible, for President Obama to reverse. Although many of the regulations have to do with energy and the environment, MSNBC's Rachel Maddow noted on Tuesday that there's also "one that'll kick opponents of the Patriot Act right in the teeth."