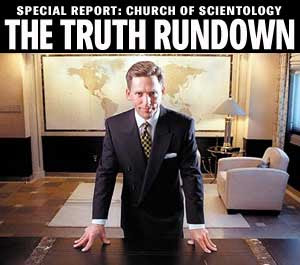 from latimes: The leader of the Church of Scientology struck subordinates numerous times and set an example for physical violence among the tightly controlled religion's management team, four former high-ranking executives told a newspaper for a story published Sunday.

The executives, who have since left the organization, told the St. Petersburg Times that they witnessed David Miscavige, chairman of the board that oversees the church, hit staff members dozens of times. "It was random and whimsical. It could be the look on your face. Or not answering a question quickly. But it always was a punishment," said Mike Rinder, who oversaw the church's legal and media relations operations. Rinder said that he was struck many times by Miscavige and that he also hit others before leaving in 2007. 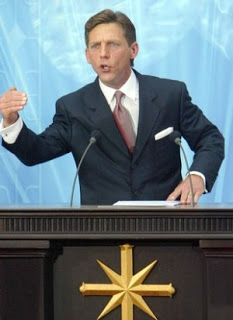 In a response to the paper, the church denied the allegations, saying that the four former executives' statements were "absolute and total lies." It called the claims an effort to tarnish Miscavige, who has led the church for more than two decades. A spokesman said Sunday that the church had provided documentation that the claims were false...

Sunday's report was the first of a three-part series on the church.

The Los Angeles-based Church of Scientology, founded in 1954 by the late science fiction writer L. Ron Hubbard, teaches that technology can expand the mind and help solve problems. It claims 10 million members worldwide, including celebrities Tom Cruise and John Travolta.

Devotees converge on Clearwater for the highest levels of the church's training.