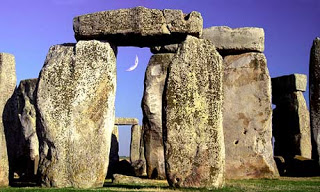 from guardian.co.uk: Centuries before the first massive sarsen stone was hauled into place at Stonehenge, the world's most famous prehistoric monument may have begun life as a giant burial ground, according to a theory disclosed on Saturday.

More than 50,000 cremated bone fragments, of 63 individuals buried at Stonehenge, have been excavated and studied for the first time by a team led by archaeologist Professor Mike Parker Pearson, who has been working at the site and on nearby monuments for decades. He now believes the earliest burials long predate the monument in its current form. The first bluestones, the smaller standing stones, were brought from Wales and placed as grave markers around 3,000BC, and it remained a giant circular graveyard for at least 200 years, with sporadic burials after that, he claims.

Archaeologists have argued for centuries about what Stonehenge really meant to the people who gave hundreds of thousands of hours to constructing circles of bluestones shipped from Wales, and sarsens the size of double-decker buses dragged across Salisbury plain. Druids and New Age followers still claim the site as their sacred place. Others have judged it a temple, an observatory, a solar calendar, a site for fairs or ritual feasting or – one of the most recent theories – a centre for healing, a sort of Stone Age Lourdes. The latest theory is based on the first analysis of more than 50,000 fragments of cremated human remains from one of the Aubrey holes, a ring of pits from the earliest phase of the monument, which some have believed held wooden posts. Crushed chalk in the bottom of the pit was also revealed, suggesting it once supported the weight of one of the bluestones. Dating the bones has pushed back the date of earliest stone circle at the site from 2500BC to 3000BC.

Mike Pitts, an archaeologist, blogger and editor of the British Archaeology journal, who has excavated some of the cremated human remains from Stonehenge, says the new theory proves the need for more research and excavation at the site.

"I have now come to believe that there are hundreds, maybe many times that, of burials at Stonehenge, and that some predate the earliest phase of the monument," Pitts said. "The whole history of the monument is inseparably linked to death and burial – but I believe that there are hundreds more burials to be found across the site, which will tell us more of the story."