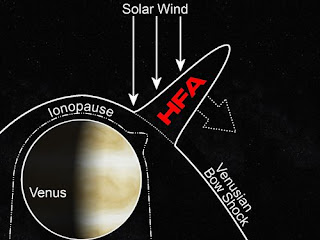 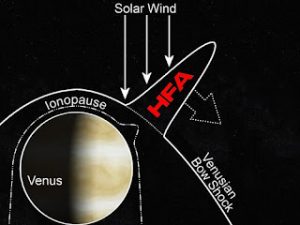 The Daily Galaxy ran an article recently, "Strange, Colossal Explosions Observed on Venus," on detecting a Hot Flow Anomaly (HFA) for the first time near Venus. What is a HFA? A description taken from data supplied by the Venus Express spacecraft relates: "...scientists painted a possible picture of how an HFA forms at Venus. The moving solar wind with its attendant magnetic fields harbors discontinuities, areas where the magnetic fields change direction, sharply and abruptly. Sometimes these discontinuities align with the flow of the solar wind, so they remain in contact with what's called the bow shock – the place where the supersonic solar wind slows down abruptly and diverts around the planet. If such a discontinuity travels slowly across the bow shock it allows time to trap particles, collecting pools of 10 million degree plasma that can expand to be as big as Earth." An amazing phenomena observed that implies HFAs may be common to all planets.

Perhaps, of equal interest however, the description shared in article of the Venusian environment. Some basic facts about Venus may surprise readers?

"In the grand scheme of the solar system, Venus and Earth are almost the same distance from the sun. Yet the planets differ dramatically: Venus is some 100 times hotter than Earth and its days more than 200 times longer. The atmosphere on Venus is so thick that the longest any spacecraft has survived on its surface before being crushed is a little over two hours. There's another difference, too. Earth has a magnetic field and Venus does not – a crucial distinction when assessing the effects of the sun on each planet"

Venus is so close yet so different. Did you know a day on Venus lasts 243 Earth days?