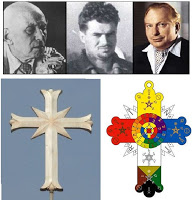 The Occult Roots of Scientology

Everyone's heard of Scientology, and if older, you've heard of Dianetics, a 1950 book by L. Ron Hubbard (pictured, right).  A reader may know little more about the "religion". Ohio State Professor, Hugh Urban, takes a closer look at Scientology in recent articles and a book. Vigilant Citzen (VC) provides a condensed version of Village Voice articles on Urban's work that make clear the occult influences on Hubbard. VC puts it, "Oh, L. Ron, you are so busted...Wow. L. Ron didn’t even change the handwriting to throw off the teacher," describing links if not direct lifting of concepts from Aleister Crowley (pictured, left). Urban points out secrecy enshrouding organization, is an outgrowth, of Cold War-Era paranoia when it got its start. Scientology misses Hubbard, a charismatic figure, who made it all go and finds itself in a period of reformation according to Urban.

"'First and foremost, Crowley repeatedly emphasizes that Magick is a science. To distinguish his practice from parlor tricks and stage illusions, Crowley spells Magick with a “k” and insists that it is an exact science based on specific laws and experimental techniques. Hence his book begins with a “postulate” followed by twenty-eight “theorems” presented as “scientifically” as chemistry or mathematics. This science is fundamentally about the correct knowledge of the individual self and its potential. In short,' Magick is the Science of understanding oneself and one’s conditions..."


Urban goes on to explain how in Crowley’s magick, the fundamental concept is Thelema, which represents a person’s inner will, and the ability to do 'what thou wilt.' Doing the processes of Crowley’s magick rituals, the point is for a magus to astrally project himself so that he can ultimately become an all-powerful being who is “capable of being, and using, anything which he perceives, for everything that he perceives is in a certain sense a part of his being. He may thus subjugate the whole Universe of which he is conscious to his individual Will.”


Sound familiar? In Hubbard’s Scientology, which he insists is a science that will allow you to discover your true nature, you learn that you are a thetan, and through his processes you will ultimately be able to leave your body and become an all-powerful being able to create universes."

The VC article covers Hubbard's close association with Jack Parsons (pictured, center) during period of the Bablalon Working experiments and an attempt to create a "Moonchild". A picture of Hubbard emerges heavily immersed in occult practices. You can access a prior post on Jack Parsons here. You may read original Village Voice article, "Scientology and the Occult: Hugh Urban's New Exploration of L. Ron Hubbard and Aleister Crowley," showing similar renderings of rosy cross (pictured: Scientology left, Ordo Templi Orientis, right) by both groups.