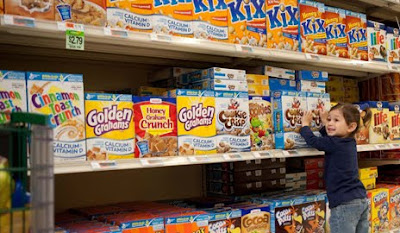 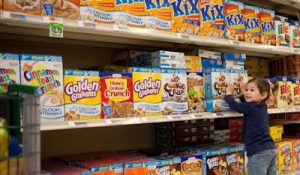 From Reuters: While U.S. food companies are making healthier breakfast cereals for children, they're also aiming more ads for their unhealthiest products at kids, according to a report issued on Friday. The "Cereal Facts" study from Yale University's Rudd Center for Food Policy & Obesity offers an outside assessment of the industry's actions and comes amid rising alarm over diet-related health costs in the United States, where nearly a third of children are overweight or obese. Kelly Brownell, director of the Rudd Center, lauded cereal makers for changing their recipes to boost fiber and whole grain content while reducing sugar and sodium, but said there was ample room for further improvement. "It's not enough and the companies are still using all their marketing muscle to push their worst cereals on children," Brownell said. Spending to promote child-targeted cereals was $264 million in 2011, an increase of more than 30 percent from 2008, according to the Yale study, which follows a similar report three years ago. The study highlighted aggressive marketing of cereals like General Mills Inc's Reese's Puffs, Kellogg Co's Froot Loops and Post Holdings Inc's Pebbles to children - brands which rank among the lowest for nutrition and the highest for added sugar, according to researchers.