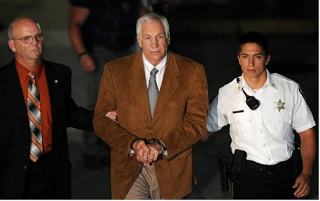 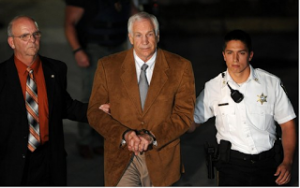 Former Penn St coach Jerry Sandusky, who couldn't keep his hands where they belong, Friday evening, left court bound in handcuffs following a guilty verdict. Sandusky convicted on 45 of 48 counts of child sexual abuse over a period of 15 years, may spend rest of life in prison. The jury began deliberations on Thursday, returning a verdict the following day. A Los Angeles Times article supplies clinical review of facts in case. Writer Jeff Frantz provides a much deeper retrospective of monstrous abuse that occurred under guise of charity. In article, "Jerry Sandusky guilty verdict: A beloved coach's life, career weren't what they seemed," Frantz writes heart-felt account on a human tragedy of immense proportions in central Pennsylvania. "Before his fall, people used to tout all the lives Sandusky impacted. In a perverse way, they were right," concludes Frantz. The long-squashed real story is the forgotten prospect of a network of perpetrators who used the Sandusky charity. A perfect candidate to take the fall, the Sandusky verdict leaves in the clear darker actors powerful enough to allow it all to happen!