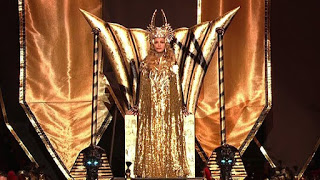 from vigilantcitizen.com: A week before the Superbowl, Madonna described on Anderson Cooper the spiritual importance she attributed to her halftime show: "The Superbowl is kind of like the Holy of Holies in America. I’ll come at halfway of the 'church experience' and I’m gonna have to deliver a sermon. It’ll have to be very impactful.”

It is rather appropriate that this Kaballah-intiate referred to the Superbowl as the “Holy of Holies” as it was the name of the most sacred place in Solomon’s Temple. No one was ever permitted to enter the Holy of Holies but the High Priest. This privilege was only granted on the Day of Atonement, to offer the blood of sacrifice and incense before the mercy seat. Madonna’s analogy was therefore telling of the mindset behind her performance...

When taken individually, the symbols described [here] can be simply considered as “cool-looking” and most Superbowl viewers did not give them much attention. The packing all of these signs and symbols in one comprehensive 13 minute performance cannot however be dismissed as “random images”. Quite to the contrary, the combination of all of these symbols form a whole and define with great depth the underlying philosophy and Agenda of those in power – the Illuminati. Madonna’s embrace of the Illuminati symbolism discussed on this site coincides with her signing with Interscope Records, one of the main purveyors of Illuminati symbolism in the music industry. Her halftime show performance can therefore be considered as the “launching” of her three-album (and 40 million dollars) relationship with the prominent label. Madonna’s Superbowl performance has shown that, despite the fact that she is an industry icon and that she pioneered most of the themes modern pop stars still exploit, she still needs to fit the mold and to embrace the same symbolism rookie pop stars.

Laced with profound imagery, Madonna’s halftime performance was a massive Illuminati ritual, one that was witnessed by billions of viewers. On this Superbowl “Day of Atonement”, Madonna, the High Priestess of the Illuminati industry, entered the Holy of Holies of America and delivered a 13 minutes sermon that was heard by all…but understood by few.

Video: Madonna's Superbowl Halftime Show:
A Celebration of the Grand Priestess of the Music Industry

Stupor Bowl Updates:
@CMPunk: "I hope this ends with Madonna taking the lid off the arc of the covenant and her face melting off like Toht."*
Madonna To Begin World Tour In Israel*
Israeli fans beg PM to hold off Iran attack over Madonna show*
NBC Snubs Miss Deaf America During Super Bowl Broadcast*
After running graphic anti-abortion ads during the Super Bowl, Randall Terry tells pro-choicers that they are going to hell*
Grist.org says: The Greenest™ Super Bowl ever!*
Video: Super Bowl Attendees Exposed to Measles?*