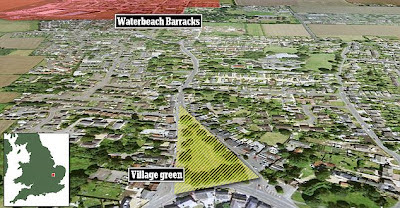 from theintelhub.com: Residents in Waterbeach, Cambridgeshire had their remote car locks malfunction in what was later determined to be caused by ‘ultra-high frequency bands’ frequently used by the military. Coincidentally, a military barracks is located near the area that the electronic malfunctions occurred. The Daily Mail, known for publishing material that other mainstream new outlets refuse to cover in Europe, recently released an article on the mysterious high frequency radio waves... An article published on strangesoundsinthesky.com also covered this mysterious dead zone and noted the similarities to this event and another report from the UK as well as one that took place in Colorado. These disturbances are most likely connected to some sort of military testing that may be classified which would account for the denial of the military’s in the multiple areas that these “dead zones” occurred. Stay tuned as we will be releasing further information on this topic in the near future.