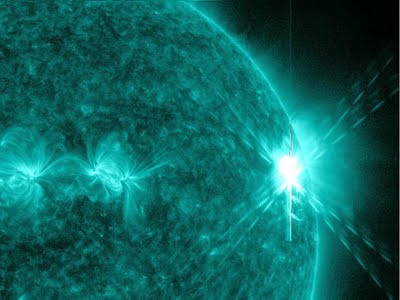 from redorbit: NASA said on Tuesday that the sun unleashed the biggest solar flare in four years. The NOAA GOES satellite measured an X6.9 flare on August 9, 2011 at 3:48 a.m. EDT The bursts of radiation cannot pass through Earth's atmosphere to harm humans on the ground, but it can disrupt GPS and communications signal, according to NASA. "It was a big flare," Joe Kunches, a space scientist with the National Oceanic and Atmospheric Administration (NOAA)'s Space Weather Prediction Center told CBS News. "We lucked out because the site of the eruption at the sun was not facing the Earth, so we will probably feel no ill effects." The space agency said it could produce enough increased solar energetic proton radiation to affect humans in space if they do not protect themselves. There was also a coronal mass ejection (CME) associated with the flare. CMEs, according to NASA, are another solar phenomenon that can send solar particles into space and affect electronic systems in salutes and on Earth. However, the space agency said the CME is not traveling is not toward Earth so no effects are expected from it.