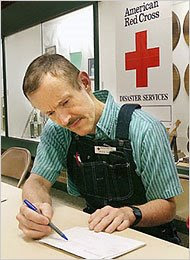 from ap: Anthrax-laced letters that killed five people and severely rattled the post-9/11 nation may have been part of an Army scientist's warped plan to test his cure for the deadly toxin, officials said Friday. The brilliant but troubled scientist committed suicide this week before prosecutors could charge him with murder.

The sudden naming of scientist Bruce E. Ivins as the top - and perhaps only - suspect in the anthrax attacks marks the latest bizarre twist in a case that has confounded the FBI for nearly seven years. Last month, the Justice Department cleared Ivins' colleague, Steven Hatfill, who had been wrongly suspected in the case, and paid him $5.8 million.

Ivins worked at the Army's biological warfare labs at Ft. Detrick, Md., for 18 years until his death on Tuesday. He was one of the government's leading scientists researching vaccines and cures for anthrax exposure. But he also had a long history of homicidal threats, according to papers filed last week in local court by a social worker.