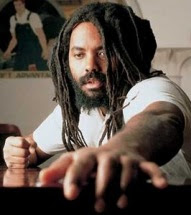 from reuters: The U.S. Supreme Court is expected on Tuesday to issue its latest decision on the fate of Mumia Abu-Jamal, arguably America's most famous death-row inmate, convicted of slaying a Philadelphia policeman, a crime he denies committing.

The court is due to rule on an appeal by the Philadelphia district attorney who is seeking to have Abu-Jamal executed and bring an end to a decades-long legal saga the inmate, a former journalist, wrote about while in prison.

Abu-Jamal, now 55, was convicted in 1982 of killing officer Daniel Faulkner on December 9, 1981. He has become an international cause celebre for the anti-death penalty movement whose supporters argue strenuously he did not receive a fair trial.

His backers say he was framed by police, that prosecution witnesses were coerced into false testimony and that ballistics evidence shows Abu-Jamal did not shoot Faulkner but that the murder was committed by another man who fled the scene.

Supporters also claim that Abu-Jamal, who is black, was the victim of a racist and notoriously pro-prosecution trial judge, the now-deceased Albert Sabo, who was overheard to say, "Yeah, and I'm going to help them fry the nigger," according to an affidavit by a court stenographer.