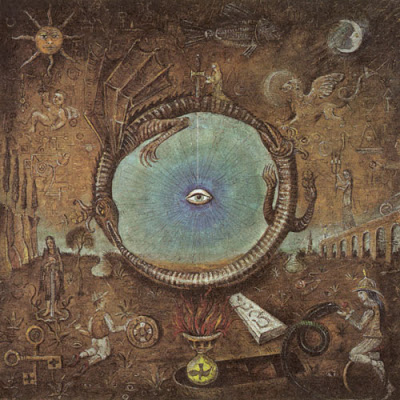 Symbolism, may be, perhaps our internal representation of outside world?  It's important to have some understanding of symbols as they've been used since time immemorial to affect us?  Symbols may access our unconscious mind directly.   Brad Jaeger provides excellent exposition of, "The I of the Radio," a drawing by Vasily Kafanov. While intended as art for a Smashing Pumpkins album, "Machina," it still provides a great depiction of many symbols.   "The appearance of Sol and Luna together as equals once again suggests a
certain level of androgynous dichotomy - two aspects of the same
original source,"  begins Jaeger.   Just below the moon, there's a griffin, "they could usually be found guarding something of significant
importance; usually treasure, or a religious relic. In our case, the
griffin is guarding and protecting the ouroboros, which is the treasure
of this plate, containing within it the infinite."   In the lower left of picture, "traditional depictions of St. Michael have often shown him in battle
with an unsheathed sword, victoriously laying waste to 'that great
serpent', or 'dragon', which Christian mythology has identified with
their concept of Satan," describes article.

Just to the right of the ouroboros,  Jaeger describes, "two figures; one holding a three-split candle holder, the other balancing a triangle with a dot at its center. Both figures are invoking the one-god-made-three; the triune concept of the trinity -- one God with three distinct personae. The invocation of three likely holds a double meaning, tying it to the founder of alchemy - Hermes Trismegistus - otherwise known as Hermes the thrice great. Hermes in all his forms is drawn upon time and time again in Machina, even appearing in a couple of Kafanov's illustrations."

The ancient ourosboros symbol described in article as "...one of the oldest esoteric symbols known to man, and without a doubt one of the most prominently used symbols during the Machina Era. The all devouring serpent -the ouroboros- first appeared in its now recognizable form in Ancient Egypt, circa 1600 BCE. Its name is Greek in origin and means 'tail devourer'.  The ouroboros is traditionally depicted as a serpent or dragon in the
process of swallowing its own tail, resulting in the formation of a
circle. Unsurprisingly the ouroboros is most often regarded as a symbol
of infinity and renewal, though it is also widely interpreted to be
demonstrating the principles of cyclical transformation and the creation
of life through death. It has also been used as a symbol for totality,
self-sufficiency, androgyny, mercury, and truth."

Jaeger, a master of symbols, concludes article:  "A final interesting note is that the title of the plate (The I of the
Radio) serves as wordplay, referring to the eye contained within the
ouroboros."