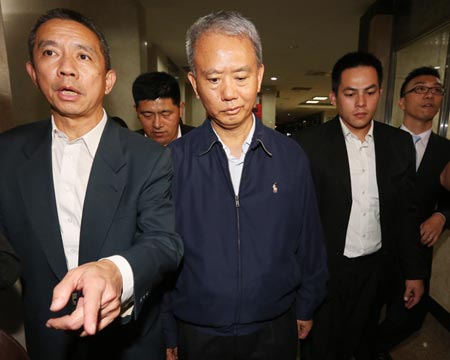 from presstv.ir: A Taiwanese tycoon has been charged with nearly 140 counts of fraud over his alleged role in the country’s latest food safety scare, prosecutors say.

Wei Ying-chung (pictured center), one of the country’s richest men, has been indicted on 60 counts of fraud and 79 instances of aggravated fraud as well as violating food safety laws for selling tainted cooking oil, prosecutors in the central city of Changhua said.
The court has been asked to seize around Tw$440 million (USD 14.67 million) of illegal profits from selling the adulterated oil.

“Wei ignores the law and disregards the danger to public health and his corporate responsibility to manufacture and retail cooking oil made from feed oil to seek personal gains,” prosecutors said in a statement.

Wei was taken into custody on October 17 and faces a 30-year jail term if convicted of the crimes.
The embattled food baron is ex-chairman of the Taiwan unit Wei Chuan Foods Corporation and Ting Hsin Oil and Fat Industrial Co., both part of food giant Ting Hsin International Group.
Ting Hsin Group was involved in three food safety scandals in Taiwan in less than one year, leading to an island-wide boycott of its products.
In the most recent case, Ting Hsin Oil was accused of selling oil intended for animal food, which is banned for human consumption, as regular lard and cooking oil.