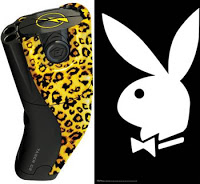 who says there isn’t an intimate connection between sex & violence?

from common dreams: Vancouver businessman Randy Puder was drawn to the booth operated by Taser International at the Consumer Trade Show in Las Vegas last January. Playboy bunnies were signing photographs while salesmen pitched a new personal Taser that’s small enough to fit into a woman’s purse, he recalled.

“It was excellent marketing,” Puder told a public inquiry Thursday probing the use of Tasers in B.C. He got a signed photo from a Playboy bunny, which he showed to The Vancouver Sun. It has the Taser company logo on it. He was asked who he wanted it signed to and he said, half-joking, “The Vancouver police board.” ...

“I was shocked, actually, which is why I’m here today,” Puder told the inquiry, pointing out that his late brother, Gil Puder, was a use-of-force trainer with Vancouver police from 1990 to 1993. Puder said he was a concerned citizen and suggested a moratorium should be placed on Taser use until there can be proper testing in Canada.

“Until tested in Canada by Canadian medical practitioners, it should be put on the shelf... We are not the United States,” Puder said. “We have an entirely different model of police and training.”