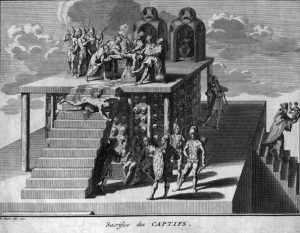 Human sacrifice was a religious practice characteristic of pre-Columbian Aztec civilization, as well as of other Mesoamerican civilizations like the Maya and the Zapotec. The extent of the practice is debated by modern scholars. Since the late 1970s, excavations of the offerings in the Great Pyramid of Tenochtitlan, Teotihuacán’s Pyramid of the Moon, and other archaeological sites, have provided physical evidence of human sacrifice among the Mesoamerican peoples.

As was written in HistoryExtra:

The Spanish invaders were shocked to find that the Aztecs carried out huge numbers of human sacrifices at their temples.

The scale of the killings has long been a matter of controversy as the Spanish may have exaggerated the numbers killed to make the Aztecs appear more barbaric.

Sacrifice was a central focus of religion in Central America. People would often stab themselves with thorns in their tongues, ears or even genitalia to offer the blood to the gods. As for human sacrifice, some victims volunteered for the good of the community or to atone for a sin, but most were prisoners of war or criminals.

The Spanish records relate mostly to the Aztec capital of Tenochtitlan, where sacrifices took place 18 times every year, with around 60 victims each time. A human sacrifice was dedicated to one of the gods, so the form of sacrifice varied accordingly.

The god Tlaloc, for example, demanded that children have their throats cut, and to please Chicomecoatl, a girl was beheaded. Huitzilopochtli preferred to have the beating hearts of men cut out and placed in front of his statue, while the severed head was put on a rack on the temple walls.

Somewhere, Mel Gibson is smiling from ear to ear. Apocalypto was an intense film, wasn’t it? Yet the truth can be stranger than fiction.

In a recent article, LatinPost wrote about how:

“previously, it was widely believed that the humans sacrificed at the Great Temple of Tenochtitlan were prisoners of wars — foreigners taken from conquered areas. However, the recent results of a study appeared to hint that the victims were not only POWs. Some of them were also individuals who had been living in the area, at least for six years. And they could also be women, children, and the elderly.

Researchers arrived at these conclusions after studying the remains of six persons among a number of victims found in the Great Temple. Samples were extracted from the teeth and skulls of the individuals, the remains of which had been dated as having lived from 1469 and 1521.“

“There was this general idea that sacrifices were mostly the result of wars, people taken from the populations gradually conquered” by the Mexicas, whose imperial capital was Mexico-Tenochtitlan, archaeologist Alan Barrera, who conducted the study, told EFE.

It was also thought that victims “were brought directly from their places of origin and sacrificed almost immediately” after arriving in the metropolis, Barrera said.