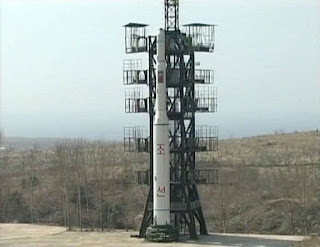 North Korea plans to launch “peaceful” satellite between April 12-16 to “to mark the 100th anniversary of the birth of its founding president Kim Il-Sung,” reports Japan Today. Elsewhere, a Space Daily account relates suspicions that “the United States and its allies see a disguised missile test in violation of UN resolutions.” “Japan on Friday readied its missile defence systems to shoot down a North Korean rocket if it threatens the country…’I have ordered officials to prepare to deploy the PAC-3 and Aegis warships,’ Japan’s Defense Minister Naoki Tanaka told reporters, referring to surface-to-air missiles and destroyers carrying missiles,” as reported in another Space Daily article, “Japan prepares defences against N. Korean rocket.” Tensions are high and may provide further drama next month.