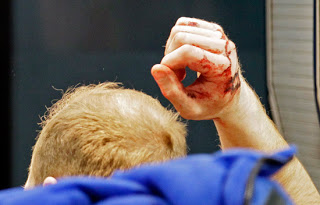 from abcnews: An explosion rocked Moscow's busiest airport today in an apparent "terrorist attack", killing 35 and injuring dozens more, according to Russian officials. The blast erupted in the Domodedovo airport at 4:40 p.m. Moscow time. In addition to the 31 dead, another 120 were injured, Evgeny Khorishko of the Russian Embassy in Washington, D.C., told ABC News, citing Russia's Ministry of Health. The attack was carried out by two suicide bombers, witnesses said according to Russia's state news agency RIA. On Twitter, one purported eyewitness, Ilya Likhtenfeld, said the bomb "was not in the luggage," but on a man standing in a crowd near a cafe. Khorishko, said it was "too early to say" who may have been responsible.