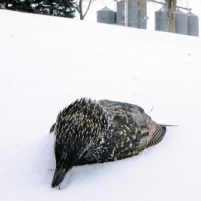 from allgov: The U.S. Department of Agriculture (USDA) has assumed responsibility for the deaths of more than 300 birds in Yankton, South Dakota. But the USDA insists it had nothing to do with other mass die-offs of birds recently in Arkansas, Louisiana, Alabama and Kentucky. The South Dakota killings were a result of the department’s Wildlife Services Program, which used DRC-1339 to poison a feedlot in Nebraska, across the state border from Yankton. The feedlot owners had complained that starlings were eating their feed and defecating in inappropriate areas. Starlings were introduced into the United States in 1890 by Eugene Schiffelin, who imported them from England and released them in New York’s Central Park. Since the 1960s, the government has eradicated large numbers of birds under its Bye Bye Blackbird operation, which has involved multiple species. In FY 2009 alone, the program killed more than 4 million birds and animals, including 1,259,714 starlings, 1,046,109 cowbirds and 969,889 red-winged blackbirds. The U.S. Fish and Wildlife Service, part of the Department of the Interior, also has killed blackbirds, grackles and starlings for public health or economic reasons.

updates: 10k cattle dead in vietnam: cows, buffalo part of mass die-off - what in the world is happening out there?