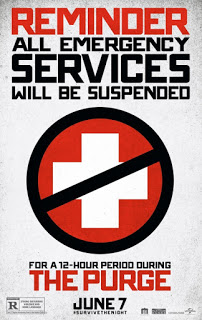 ‘The Purge’: The #1 Film In America Is A Giant, Satanic Ritual

Hollywood once again proves their originality and bias towards the globalists. Wait, do they really? Walking out of the movie theater in Tucson, AZ, I said to a theater staff member “The movie sucked. Don’t see it. I got dragged into going to see it” in place of what I should’ve really said: “This movie was no ordinary slasher film; there seemed to be insidious intent and purpose, especially by the insertion of some obscure devices, and the generally implausible plot reflecting the demented psyche of the elite that we find hard to grasp or understand. The plot summary is as follows: “In the not-too-distant future, a new political regime, called the New Founding Fathers of America, attempts to control an epidemic of violence and crime by imposing strict martial law, and by trying out a new experiment called The Purge, where three times a year, for 12 hours, murder is completely legal.”

Among the themes of the movie, aside from pointless murder and 'A Clockwork Orange'-esque brutality on a less believable scale, I spotted references to eugenics, satanic ritual, child sacrifice and underage pornography, all of which led me to believe that this culture of death that Hollywood is promoting hasn’t seen the end of its bloodlust yet. There are more films to come that push the envelope on violent horror with emphasis on small indicators that only the initiated can spot - those aware of the hidden agendas, the secret societies and their bad blood against free humanity. Let’s start with underage pornography. The #1 film in America, seen by countless millions of eyes, first offers an inappropriate scene featuring a minor, Zoey Sandin, and her too-old-to-be-with-her boyfriend Henry. They are kissing, which is okay, until there is a scene where the boy can be seen lifting the girl’s bare thigh as he appears to be having sex with her. That’s strike one, a definite oddity that I didn’t appreciate. I could picture Henry Kissinger snickering in his movie seat, snatching the popcorn out of ol’ Condi’s fingertips. In the back of the theater, David Rockefeller is knitting his hands together maliciously, enjoying the scene immensely. Theater operations funded by the Bush dynasty, of course. The cushioned seats plush red, like gourmet Rothschild wine. Or the blood of innocents?

So "The Purge" begins, an event that the family has prepared for all year and an event that the father supports, and in a way, profits from, since he is the leading seller of security systems for his entire neighborhood, which is quite luxurious. It’s the year 2022 and the “New Founding Fathers” institute martial law and introduce a solution: killing is legal for a day. Does that ring any bells guys? During the Purge, a homeless man can be seen running in the street, extremely sweaty and exhausted looking, seeking a place of shelter and protection. Mr. Sandin’s son Charlie unlocks the home security system and lets the man in. While this is going on, Zoey’s boyfriend upstairs has a gun and he tries to kill Zoey’s father (Ethan Hawke) because apparently he’s too old for his daughter and killing is legal for a day. Perfect solution to get in good with the family! In this society, everyone is psychotic and gives into intrinsically evil decision-making to get their way. No life is spared in the quest to take what is “rightfully theirs.” The boyfriend shoots at the father but he is a lousy shot and gets hit in the chest, then dies soon after. Meanwhile, the homeless man, who by the way is African American and has a dog tag on his chest that’s visible for the whole movie, purposefully I believe, vanishes into the house. So now a young man is dead and there is a strange man locked inside of the house with them. The house then turns chaotic with tons of miscommunication, until suddenly some purgers come knocking at the door. They are all wearing masks except for the leader: a light brown haired, blue eyed Sephiroth-like character, resembling the valedictorian of Yale college or the leader of a fraternity.

I’m willing to bet he’s the Skull and Bones team captain, considering this is a very rich neighborhood. He has the personality of someone who is sadistic and feels strongly about “cleansing the world” of homeless people who drag down society and contaminate civilization. He is of course referring to the homeless black military war veteran whose dog tags hang outside of his shirt, and who seeks shelter with the family. He bangs on the door and demands that if they don’t give up the homeless man and allow them to purge, they will break into the house’s security system and kill the entire family before the night is over. Because even in this perfect American world where they “solved” crime, killing kids is legal. It makes sense to me, because this is what the power elite is capable of: using their influence while they are elevated on the pedestals of their oligarchy to make mockeries of the working class, the serfs, the poverty-stricken, and the less fortunate. These young purgers seem to show no empathy, nor any mercy towards a homeless man, but they claim to have principles backing their actions. Cleansing the Earth’s population of the supposed weaklings who are leeching society for the good of this new world order sounds like a direct reference to eugenics to me. And an unsettling one considering this movie is being seen by hordes of movie watchers.

Later, the son Charlie has an electronic toy car with a broken baby doll mounted atop it. It’s part baby, part exposed cyborg with half of its face sheared off by what looks to be an electrical burn. It's also a surveillance tool, a hidden eye the boy uses to 'see' what's going on throughout the house, his private NSA, if you will. He watches through a Google Glass type of contraption. There is one glowing red eye on its face, and it is connected to the mechanical car, which could be a reference to transhumanism. The boy’s car tries to lead the homeless man who is hiding behind a couch into safety, but ultimately the boy’s hiding place leads the man into getting caught later on in the movie. After much searching in the house, the father apprehends the man and shoots him in the lower abdominal area. He has come to terms with his primal, murderous side to save his family, prepared to throw the man out of the house to be purged so he can protect them. Picture this: the kids are in the room as the father and the mother tie up the gunshot wounded homeless man. He resists them, though he is very weak at this point, so Ethan Hawke encourages her to stab him repeatedly in the wound in a sickening way as the children sputter and protest against their actions.

Somehow, after all this, they are shocked at “what they’ve become” and the family decides as a family unit to “fight” but really the father somehow has a change of heart and conscience (after shooting and stabbing a man who is now tied up) in preparation to “offer” him to the predator class outside. He is offering them a sacrifice for the well being of his kin. In summary, this scene and many like it before and after, are an almost traumatizing experience to behold, causing me to sit back and look around at the audience taking in this bizarre concoction, unsuspecting that it had more meaning below the surface. The thing that perplexed me was that a destabilized economy and a devalued dollar brought on this solution…when the solution should probably be to examine where the dollar comes from: The Federal Reserve! The audience, in the eyes of Hollywood henchmen, unfortunately can’t process anything advanced like that, so they settled for a dumb plot device that lawmakers agreed to suspend “law” itself for 12 hours so the population can “release their aggression.” If I needed to release my aggression, I would meet Ben Bernanke himself in the middle of a boxing ring with a bazooka and a pair of handcuffs. Some solution for a failed economic system due to fiat currency…

Do not watch this movie unless it’s for research purposes, or if you solely want to be entertained and subliminally bombarded. There is heavy Satanism circulating within this movie and I watched it as though I imagined the personage of the elite psyche manifesting itself through a typical slasher film. Certain insinuations set it apart from the rest of its macabre ilk, like the mentions of new founding fathers, martial law, ethnic cleansing, and the sacrifice of both children and military veterans, who most of us know are used as cannon fodder and then disposed of in the aftermath of illegal warfare. Later, the family is saved by their neighbors, then betrayed by their neighbors who watched the whole thing happening (then deciding to purge the family themselves) before the situation is remedied by the black man who is now armed with a gun. Then the father dies and the Sandin family is traumatized, but alive. Symbolism: the breakdown of a family via divide and conquer, first starting from within. Trust no one; not even your neighbors. Everyone is a possible murderer out to get you and your family. Martial law is the only way to secure your cities now. You’ll beg for the police state…

If anything was purged, it was my intelligence, and I feel bad for the minds of millions who have taken in the film, even if only visually. There has to be some residue that we can hopefully eradicate through spreading awareness about the desensitization agenda: by rejecting Hollywood atrocities called films with sadistic undertones. Here’s a new tagline: WARNING: All New World Order multimedia will be suspended. Please return to your homes.